Latest News
Home /Unemployment spikes and Congress moves ahead on $2 trillion in aid – CNN
House Speaker Nancy Pelosi —
who turns 80 today — has said she would prefer that the Senate measure is adopted by unanimous consent, which would spare members who are isolating or at risk from having to travel back to Washington. But Democratic Rep. Alexandria Ocasio-Cortez, the New York freshman, is
leaving open the option of objecting, potentially forcing House members to return and delaying a vote. Pelosi, however, told reporters that won’t happen. “We will be passing the bill tomorrow,” she said today,
CNN’s Haley Byrd and Clare Foran report.

A historic spike in unemployment

A record number of Americans filed for their first week of unemployment benefits last week as public health guidelines have shuttered businesses and kept workers at home.

Initial jobless claims soared to a seasonally adjusted 3.28 million in the week that ended March 21,
according to the Department of Labor. That is the highest number of initial jobless claims in history, since the federal government started tracking the data in 1967. The previous high was 695,000 claims filed in the week ending October 2, 1982.
As CNN Business’ Anneken Tappe writes:

The key difference between the coronavirus shock compared with past periods of economic distress: it is sudden and impacts virtually every industry and business model around.

As a result, economists are expecting millions of job losses in the coming weeks.

Treasury Secretary Steven Mnuchin minimized the numbers, saying they are “not relevant” in light of the forthcoming government aid. A selection of replies:

‘The virus makes the timeline’

The US
death toll from coronavirus has now topped 1,000.

Is there a timeline for a return to normal life?

In the words of Dr. Anthony Fauci: “You don’t make the timeline, the virus makes the timeline.”

“You’ve got to respond in what you see happen,”
Fauci told CNN’s Chris Cuomo on Wednesday on “Prime Time.” “And if you keep seeing this acceleration, it doesn’t matter what you say. One week, two weeks, three weeks — you’ve got to go with what the situation on the ground is.”

Trump told US governors on Thursday his administration is preparing to issue new social distancing guidelines based on geographic risk factors that would allow some places to relax restrictions sooner than others. In a letter, Trump said new coronavirus testing capabilities would allow his administration to identify “high-risk, medium-risk and low-risk” counties.

He said this week he’d like to see the country “raring to go” by Easter. That’s on April 12, a date that many health experts say is unlikely.

A letter from the President 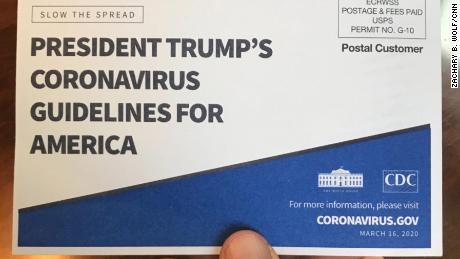 Zach got some official government mail concerning coronavirus that credits Trump with his administration’s social distancing guidelines, even as he continues to agitate for a quick return to normal.

But as Zach noted, this is another power of incumbency: Campaign mail that doesn’t cost the President a thing.

US stocks rally despite record…