The ongoing Wuhan coronavirus outbreak has now reached a grim milestone: its death toll has officially exceeded that of the 2003 SARS outbreak. The epidemic is also placing a severe strain on multinational supply chains that span the breadth of China’s industrial centers currently under a lockdown.

China’s National Health Commission announced 89 deaths in mainland China on Saturday – the highest number for a single day since the epidemic began – with the country’s total number of infections having risen to 37,580. Moreover, 813 people around the world have lost their lives as a result of the 2019-nCoV infection with 811 of those unfortunate deaths hailing from China.

Notably, the SARS outbreak in early 2000s resulted in 774 deaths and just over 8,000 infections. However, while the SARS epidemic took months to reach its zenith, the coronavirus outbreak has already surpassed this crest in a matter of weeks. Nonetheless, as opposed to the SARS death rate of 9.6 percent, the 2019-nCoV’s mortality rate currently stands at 2.2 percent.

The following infographic illustrates the current unfortunate human toll of the coronavirus outbreak (for real-time updates, head to this website maintained by Johns Hopkins CSSE): 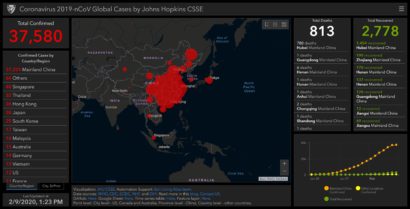 Several other countries announced new infections over the weekend, including Thailand, France and Singapore, which now has 40 cases of the virus.

The infographic below from CNN illustrates the global reach of the epidemic: 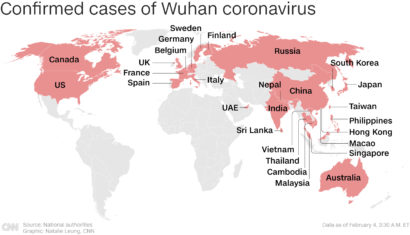 Chinese telecommunication companies have been stealthily tracking the movement of their customers for a while now. However, such companies are now openly touting their tracking abilities. As an illustration, China Mobile has been sending text messages to Beijing residents, offering them the facility to track their movements over the past 30 days. Presumably, this service is intended to help Chinese citizens in recalling their movement if questioned by authorities or employers.

Additionally, China’s industry ministry has called on the country’s AI companies to assist in fighting the coronavirus epidemic. Accordingly, the facial recognition firm Megvii said this week that it has developed a method of identifying people with fevers by integrating the results from thermal cameras with body and facial data. Moreover, SenseTime has built a system that is able to identify people even when they are wearing face masks. This system is intended to beef up security at the entrance of buildings and other sensitive instalments.

Impact on the tech sector as supply chains freeze

In order to curb the spread of this disease, the lunar new year holidays have been extended in key Chinese regions, including the vital Shandong province and the cities of Suzhou and Shanghai. Moreover, much of China’s transportation network remains suspended.

Qualcomm (NASDAQ:QCOM) has lowered its earnings guidance for the next quarter partly due to the impact of the coronavirus epidemic. The company’s CFO Akash Palkhiwala said during the latest earnings call:

“There is significant uncertainty around the impact from the coronavirus on handset demand and supply chain.”

Tech giants such as Apple (NASDAQ:AAPL), Google (NASDAQ:GOOGL), Microsoft (NASDAQ:MSFT), Tesla (NASDAQ:TSLA) and Samsung have closed their offices and manufacturing facilities in China. Even though most of these closures were originally slated to last until the 9th of February, many companies have not specified the scheduled date for the reopening of these offices and facilities.

The closure of facilities belonging to Foxconn (TPE:2354) and Pegatron (TPE:4938) is expected to delay the production of iPhones and AirPods. A Nikkei Asian Review report on Saturday indicated that the Chinese authorities are preventing Foxconn from reopening its Shenzhen plant. Additionally, Foxconn has unilaterally decided to keep its Zhengzhou plant closed until the conclusion of a government review.

Many tech products that were expected to be shipped in February now face increasing delays. For example, Facebook (NASDAQ:FB) has stopped taking new orders for its latest Oculus Quest VR headset, citing the outbreak for the delay. Moreover, the launch of Nintendo’s (TYO:7974) new Switch console is also purportedly being delayed with pre-order availability deferred to an unspecified date.

Similarly, Huawei has postponed its developers’ conference due to take place next week. Also, NVIDIA (NASDAQ:NVDA), LG Electronics (KRX:066570) and Ericsson (STO:ERIC-B) have withdrawn from the upcoming Mobile World Congress conference in Barcelona.

For an exhaustive list of companies being impacted by the coronavirus outbreak, head over to this report by the Verge.