At Saint Anselm College on Thursday evening, 38-year-old Buttigieg spoke about indicators that current and future generations will not be as financially sound as previous generations.

He said: ‘Statistically, we run the risk of being the first generation in American history to actually be worse off economically than our parents if nothing is done to change the trajectory of this economy.’

‘To me, that is not just a concern for our generation, it’s a concern that calls on us to build an alliance among generations to try to make sure that the future really is better than the past.’

In original footage from the live event, Buttigieg’s answer does not inspire applause from the audience until 10 seconds later when he’s officially finished his answer.

But an altered clip shared by Pete for America has added fake applause. 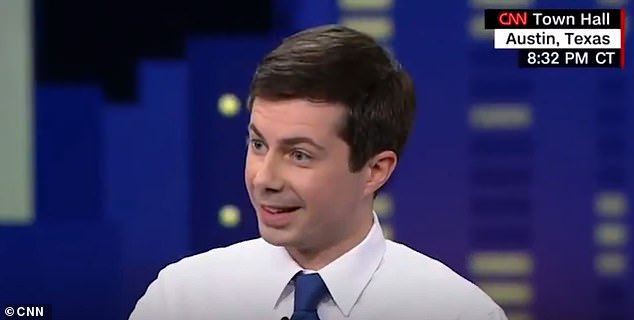 The artificial addition was flagged by Center for Popular Democracy Action, a progressive advocacy group that supports Bernie Sanders.

The group uploaded side-by-side videos of Buttigieg answering the question on Twitter for comparison, while adding the hashtag ‘SneakyPete.’

Later the group flagged a second doctored clip of Buttigieg from the CNN town hall that was featured by his campaign.

In that instance, Buttigieg is speaking with CNN anchor Jake Tapper on how to pronounce the candidate’s last name.

‘Either way, it gets you there,’ prompting audience laughter and applause in his campaign’s clip.

The original version ends with Buttigieg saying ‘Back home, they just call me Mayor Pete’, followed by just laughter.

Twitter users sprung at the opportunity to blast Buttigieg for including extra laughter and applause on promotional items.

One user said: ‘And I’m sure he didn’t think anything was wrong about it. Did you Smollett, er, Peter>Butt.’

‘#PeteButtigieg’s campaign appears to have edited a video from a town hall to add audience applause in a version it posted online. You’re pretty desperate when you have to add applause to your own town hall…’ a woman said.

One man joked that Buttigieg should have boombox with laugh and applause tracks on repeat.

Texas Girl: ‘#PeteButtigieg’s campaign appears to have edited a video from a town hall to add audience applause in a version it posted online. You’re pretty desperate when you have to add applause to your own town hall’

Others hit back at social media’s outrage, noting that Buttigieg did actually receive laughter and applause – just not at that specific moment.

‘Oh come on. Watch the whole clip. The audience applauded at the end of the CNN clip,’ one man said.

‘Pete’s campaign just shorted the clip but kept the applause. This is a lame attack. Let’s keep the discussion on real issues please.’

Some users pointed out that Buttigieg did receive laughter and applause during his CNN Town Hall, but not at those specific moments 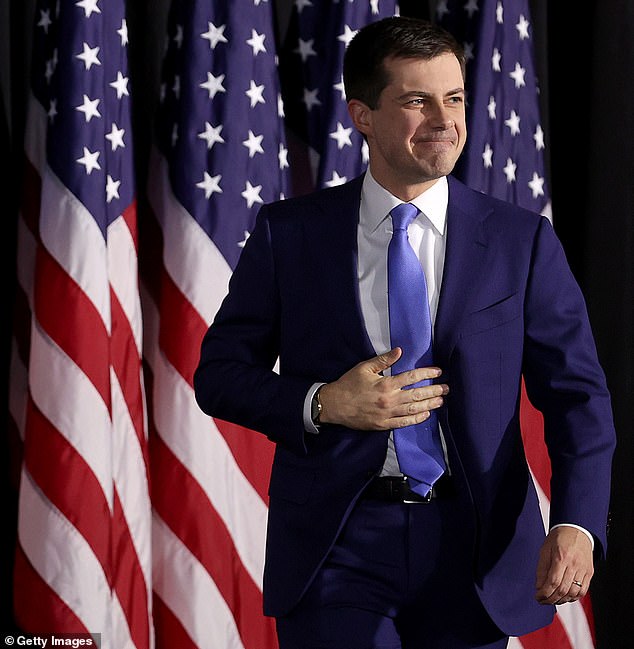 Buttigieg walked away from the Iowa Caucus with a narrow win against his Democratic competitors, specifically Bernie Sanders, 78.

Elizabeth Warren came in third with 18 percent and Joe Biden, whose poll performance has always been high, came in a surprising fourth place.

Buttigieg’s hopeful win made him the main target during Friday night’s Democratic Debate.

Candidates targeted his lack of experience, as well as low support from black and Latino voters.

Biden and Amy Klobuchar questioned whether Buttigieg had the capacity to successfully face off with Trump, questioning whether he has the experience to lead the nation. 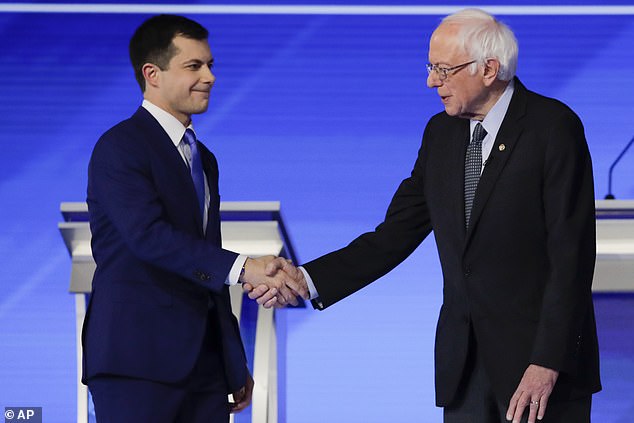 Buttigieg, who served two terms as mayor of South Bend, a city with a population of 100,000, said the Washington insider experience of some of his rivals was no longer what was needed, and it was time to ‘turn the page’ on the old Washington politics.

‘I freely admit that if you’re looking for the person with the most years of Washington establishment experience under their belt, you’ve got your candidate, and of course it’s not me,’ he said.

Klobuchar hit back claiming that ‘it is easy to go after Washington, because that’s a popular thing to do. It is much harder…to lead and much harder to take those difficult positions’.

Then she dug into the fresh-faced Buttigieg: ‘Because I think this going after every single thing that people do because it’s popular to say and makes you look like a cool newcomer, I just – I don’t think that’s what people want right now. We have a newcomer in the White House, and look where it got us. I think having some experience is a good thing.’ 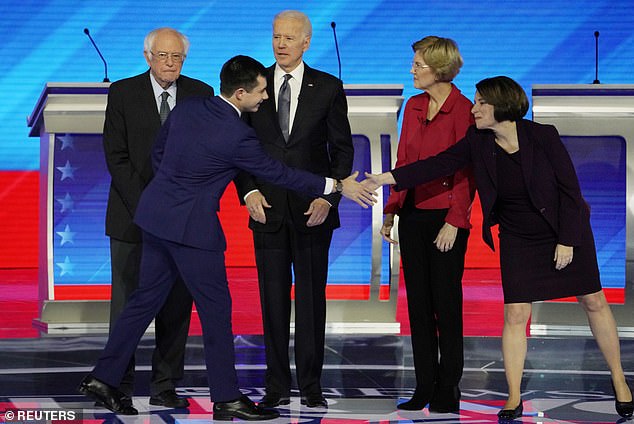 Piling on the criticism for Buttigieg was hedge funder and philanthropist Tom Steyer, 62, who also poked at Joe Biden Friday night.

‘That’s why I’m worried about Mayor Pete. You need to be able to go toe to toe with this guy [Trump] and take him down on the debate stage or we’re going to lose, he warned. ‘We got to win or we are in deep trouble and we keep not talking about the facts,’ he said.

Biden leaned in further saying of Buttigieg: ‘He’s a mayor of a small city who has done some good things but has not demonstrated his ability … and we’ll soon find out.’

Buttigieg responded to the claims he lacks experience by arguing that the way to beat President Trump is with a different kind of politics.

‘We’re going to put up somebody who’s not afraid to call out things like his disgraceful behavior at the national prayer breakfast,’ he said, and by nominating someone from a working class community that Trump says he is appealing to. 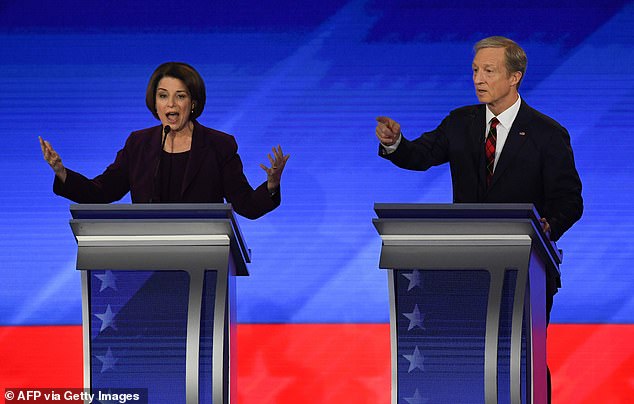 Steyer also took a hit at Buttigieg over his diversity problems and his lack of support from black and Latino voters.

Buttigieg came under fire for his record on race in South Bend. When asked about an increase in arrests of blacks on marijuana-related charges, he said as mayor he targeted cases ‘when there was gun violence and gang violence.’

Asked if Buttigieg’s answer was sufficient, U.S. Senator Elizabeth Warren, 70, said: ‘No. You have to own up to the facts.’

President Donald Trump took a personal swipe at Buttigieg after Democrats fumbled the initial count of the Iowa Caucus.

‘The Democrats don’t know what they hell they’re doing. The only thing they didn’t check was to see if the app worked. It didn’t. It all fried,’ he said.

‘It turned out to be Pete Buttigieg. Who ever the hell that is? Mayor Pete,’ Trump said. ‘Somebody explain that one to me. Have you ever seen anything so crazy?’