Wallops Island, Va. — NASA is planning to launch an Antares rocket and Cygnus spacecraft from NASA’s Wallops Flight Facility in Virginia on Sunday on the CRS-13 mission bound for the International Space Station.

The latest weather forecast is 95% favorable for launch.

Look northeast beginning at 5:39 p.m., the launch time. The rocket will travel over the Atlantic Ocean as it rises over the horizon 2.5 minutes later, hidden initially by the curvature of the Earth.

About a minute later the main engine will cut off, stage one will separate and the vehicle will coast for nearly a minute, making it more difficult to see.

Then the second stage will ignite to place the Cygnus spacecraft into a rendezvous orbit with the station. 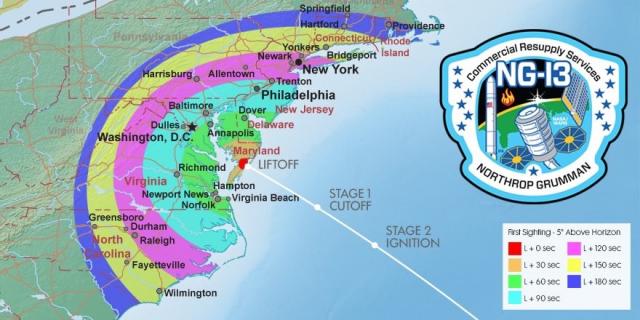 Cygnus will carry about 8,000 pounds of crew supplies and hardware, including new science and research investigations with applications in space and on the ground.

The MobileSpaceLab can be reconfigured to meet the needs of each tissue and cell culture microgravity biology experiment. The Mochii investigation will demonstrate a new miniature scanning electron microscope (SEM) with spectroscopy.

OsteoOmics will study cellular mechanisms of bone loss in microgravity in a hope to find better preventative care and treatment for osteoporosis on Earth and for astronauts on long duration missions. The Phage Evolution experiment focuses on bacteria destroying viruses.

When the Cygnus space craft undocks in May, the final experiment will be conducted safely away from the space station. The Spacecraft Fire Experiment-IV will examine how fire develops and grows in different materials and conditions.

NASA’s WFF Mission Status Center page offers a directional finder for the launch and audio feeds you can follow along with. Mission updates are available on the NASA Wallops Twitter feed.

NASA and the European Space Agency (ESA) are planning the launch of the Solar Orbiter Mission Sunday during a two-hour window beginning at 11:30 p.m. EST from the Cape Canaveral Air Force Station. The mission will make its first close approach to the Sun in a year after a gravity assist from Venus in December.

Forecasters at the Air Force’s 47th Weather Squadron are predicting an 80% chance of favorable weather but are keeping an eye on winds at the ground level as well as the formation of any cumulus clouds near the launch site. 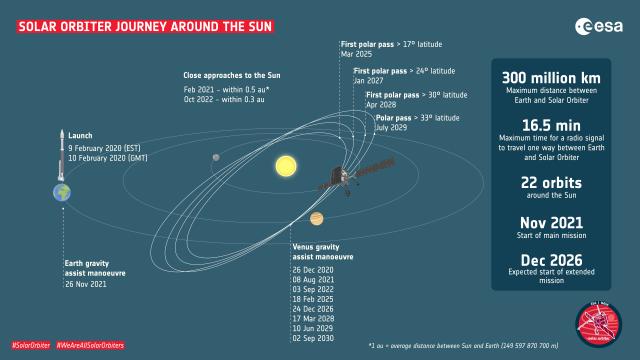 The Solar Orbiter will provide the first uncharted images of the Sun’s polar regions. The mission focuses on four big questions:

As the Parker Solar Probe continues to draw closer to the Sun, flying into its outer atmosphere just 3.9 million miles from the surface, the Solar Orbiter will provide a complimentary data set from its vantage point 42 million miles away.

The mission carries five remote sensing instruments, including cameras focused on the face of the Sun and its atmosphere and three instruments studying energetic particles, magnetic fields, radio and plasma waves, and the solar wind immediately around the spacecraft.

The launch will be broadcast live on NASA TV with coverage starting at 10:30 p.m.

The Antares rocket at the Mid-Atlantic Regional Spaceport (MARS) launch Pad-0A ahead of a planned Sunday 5:39 pm launch (Credit: NASA/WFF)

Launch of the Antares rocket may be visible Sunday Feb 9 beginning at 5:49 pm EST along the east coast (Credit: NASA/Northrup Grumman)