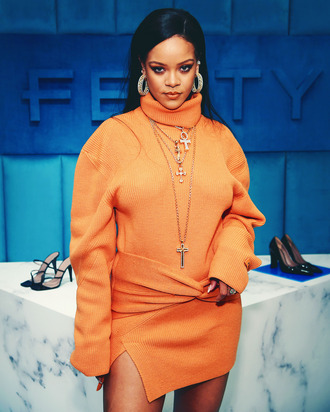 Rihanna arrived at the Fifth Avenue Bergdorf Goodman last night dancing and purring, “Well hello everyone.” The newly anointed queen of LMVH came to New York Fashion Week to debut her new Fenty collection at the department store, alongside its director of women’s fashion, Linda Fargo.

The collection is full of utilitarian jackets and generous knit sweaters and dresses, all in tones of army green, khaki, and bright orange. Rihanna told the Cut the inspiration was to “feel fierce but casual, easy.” The pieces “just ooze that freedom, that flexibility to do whatever you want.” She aimed to create clothes that were not dependent on the time of year — pieces ripe for layering in winter but stunning on their own once it gets warm.

She also aimed to create clothing that didn’t require her to consider gender. “I just feel like there should be no one to tell me where the hell to buy my shit that I want to wear,” she said, “So when it comes to my demographic, I feel like they think the same way, and they really exude that. When I’m designing and I have them in mind, I don’t think I should tell them what to do or where to shop.”

In comparison to her blowout Savage x Fenty lingerie show last season, the collection release was a much more subtle mark to leave on fashion week. Rihanna says that’s because she has different priorities and goals for her two brands, Savage x Fenty and just plain Fenty. “It’s like having two kids but one is a newborn, and one is 3. They need a different amount of attention, and they need a different amount of intimacy,” she said. “I love them all the same but they’re all different kids.”

Upon reflection, the lingerie collection might be older than a 3-year-old. Rihanna laughed, “She might just be a nasty teenager.”

Of course, Rihanna may be a mega pop star, businesswoman, and fashion designer, but she’s also human, and newly single after breaking up from her billionaire boyfriend on the eve of Valentine’s Day. Asked what the perfect single Valentine’s Day is, she semi-bashfully plugged her lingerie: “Go to savagex.com right now and get you the one thing you love the most. Do not look at the price, because it’s for you, and you can’t put a price point on that. And then eat whatever the hell you want. Women don’t give themselves permission to do that enough.”

As for what Rihanna herself will be doing on February 14, she shared a secret with the Cut about her rumored next album. “I’m going to be in the studio. I’m so excited actually. I can’t say who I’m working with, but it’s somebody I’ve been wanting to work with him for a long time,” she said.

Afterward, Queen Robyn Rihanna Fenty joined the party inside the after-hours department store, strutting through the starstruck crowd in sunglasses and dancing with the DJ. Said one fan, amazed that she got as close to Rihanna as she did, “I’m sick! I’m sick.”

Get the Cut newsletter delivered daily

By submitting your email, you agree to our Terms and Privacy Notice and to receive email correspondence from us.