With a margin of error of 1.3%, the poll meant the election was too close to call Saturday, but indicated a hung parliament was almost inevitable and that long political negotiations were ahead.

The once-marginal Sinn Féin — which was the political wing of the IRA during its drive to force Britain out of Northern Ireland — appears to have successfully reshaped its image. According to the exit poll by Ipsos MRBI for The Irish Times, RTÉ and others, the party has become a popular option for young Irish voters frustrated with issues such as housing unaffordability.

Sinn Féin — led by Mary Lou McDonald, who took over from longtime leader Gerry Adams two years ago — was never in the running to command the Irish Dáil, or parliament, outright and form a government. It only fielded 42 candidates, short of the 80-seat threshold. There are 160 seats in the Dáil. The speaker is automatically re-elected and not considered a lawmaker with voting rights.

Sinn Féin could technically form a coalition with smaller parties, but its success Saturday is more likely to translate into a seat at the table in coalition negotiations.

Fine Gael has said it would not accept Sinn Féin in any coalition. Fianna Fáil, led by Micheál Martin, has said the same, although some analysts have speculated it is not impossible for both nationalist parties to work together.

A possible scenario is that Fianna Fáil could win the most seats and Fine Gael returns the favor by supporting its rivals.

Should political negotiations fail and no party can form a government, fresh elections are another possibility.

The vote count should by the end of the day show larger margins between the number of seats allocated to each party than the exit poll’s three-way tie in the popular vote suggests. It’s not inconceivable that counting in some constituencies could continue into the days ahead.

Ireland uses a system of proportional representation but also includes preferential voting, meaning that first-choice votes could be shifted to other candidates and translate to a different proportion of seats. 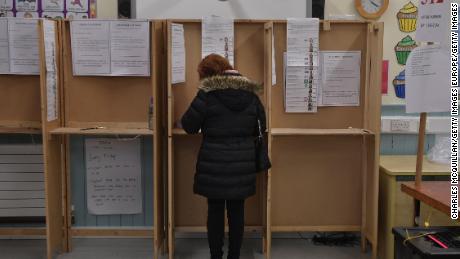 Varadkar was elected leader of Fine Gael in 2017, in a historic vote that propelled the former doctor to become the country’s first openly gay Taoiseach, as well as its youngest and the first with an ethnic minority background. He was seen as a symbol of a fast-liberalizing Ireland, overseeing the country’s relaxation of its strict anti-abortion laws just years after Ireland legalized same-sex marriage.

Varadkar had highlighted the rebound in the Irish economy and his role in Brexit negotiations to keep open the border between Ireland and Northern Ireland, which is part of the United Kingdom, in his campaign for re-election. Fine Gael has, however, been in power since 2011 and pre-election polls showed a clear appetite for change.