Imprisoned comedian Bill Cosby rushed to thank rapper Snoop Dogg for calling for his freedom as they slammed Gayle King for trying ‘to tarnish the legacy of successful black men’ after the CBS presenter brought up Kobe Bryant’s rape allegations.

Cosby, 81, joined Snoop Dogg in slamming CBS, King and Oprah for trying ‘to tarnish the image and legacy of successful Black Men even in death’ after CBS host King faced intense backlash over an interview in which she mentioned the Bryant allegations.

The comedian claimed that ‘successful Black Women are being used to tarnish’ the reputation of black male celebrities such as Kobe Bryant and Michael Jackson.

It is not immediately clear how Cosby, who is serving three to ten years in a Pennsylvania prison for sexual assault, has access to his Twitter account. 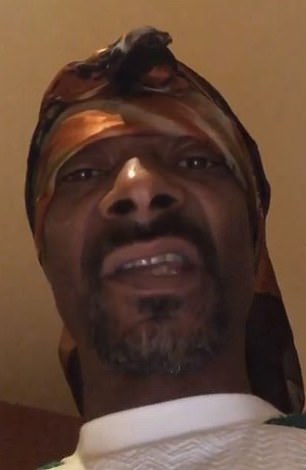 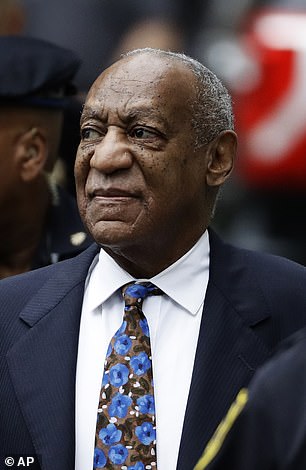 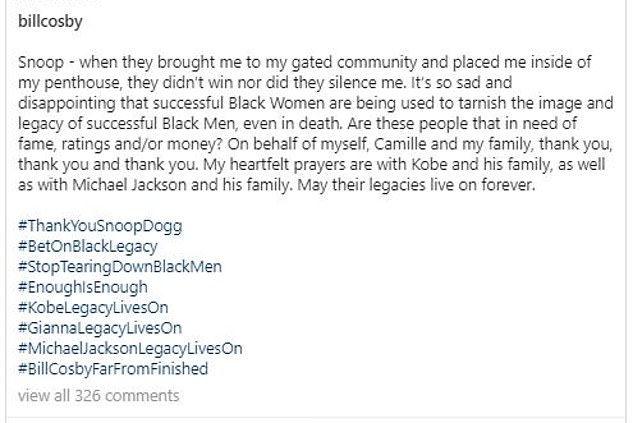 On Instagram, Cosby took a hit at CBS for tarnishing ‘the legacy of successful black men’

Mentioning Snoop Dogg, 48, Cosby wrote: ‘when they brought me to my gated community and placed me inside of my penthouse, they didn’t win nor did they silence me. It’s so sad and disappointing that successful Black Women are being used to tarnish the image and legacy of successful Black Men even in death.’

In further tweets he added: ‘Are these people that in need of fame, ratings and/or money? On behalf of myself, Camille and my family, thank you, thank you and thank you. My heartfelt prayers are with Kobe and his family, as well as with Michael Jackson and his family. May their legacies live on forever.’

Snoop Dogg responded to the thanks by saying ‘Love u uncle bill’ and reposted Cosby’s comments along with a picture of them both. 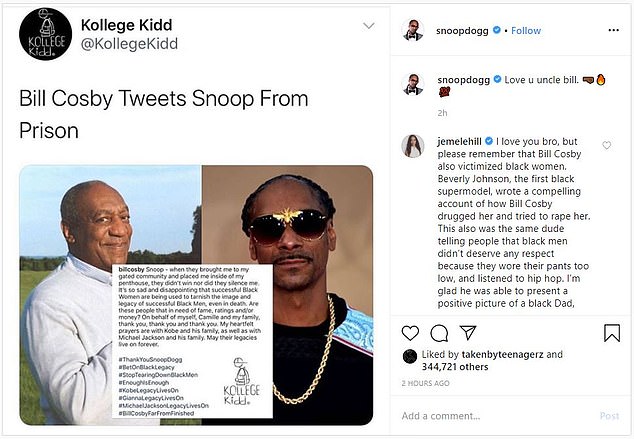 Cosby’s reentry to social media came after Snoop Dogg unleashed his anger on CBS host Gail King, claiming that she and Oprah were happy to believe rape and sexual assault accusations against black men but have been pictured with movie mogul Harvey Weinstein, who is currently at trial over sexual assault charges.

King faced intense backlash earlier this week after CBS posted a clip of her interview with former WNBA star Lisa Leslie, during which the reporter asked Leslie about the late Kobe Bryant’s 2003 rape case

Snoop Dogg took offense to King’s comments, criticizing her and Oprah in several expletive-ridden posts in which he called for Cosby’s release from prison and claims that the women tried to tarnish the names of Cosby, Bryant and Michael Jackson but failed to do so with Harvey Weinstein.

In a video captioned ‘Let the family mourn in peace’, he said: ‘We expect more from you, Gail. Don’t you hang out with Oprah? Why y’all attacking us? We your people.

‘You ain’t come after Harvey Weinstein asking them d—–s questions. I get sick of y’all. I wanna call you one. Is it OK if I call her one? Funky dog head b—h.’

In a further Instagram post on Oprah with Harvey Weinstein, the rapper said: ‘Did that fake a– micheal Jackson [sic] s–t to tarnish his name with them lying a– kids and here she is with a known rapist smiling and laughing. F–k u and Gayle. Free bill Cosby.’ 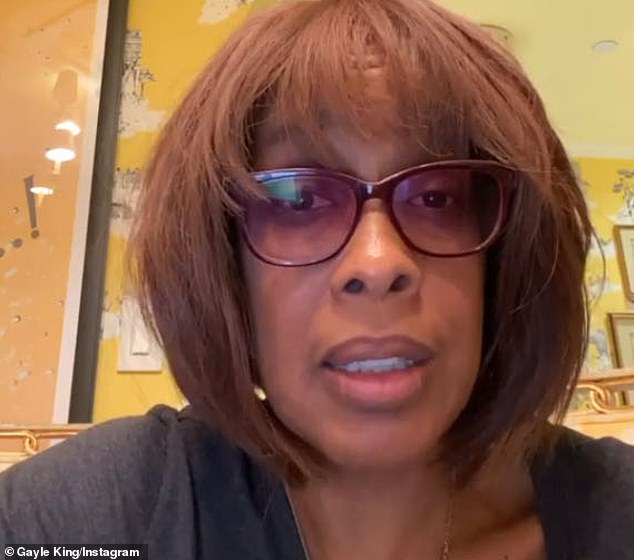 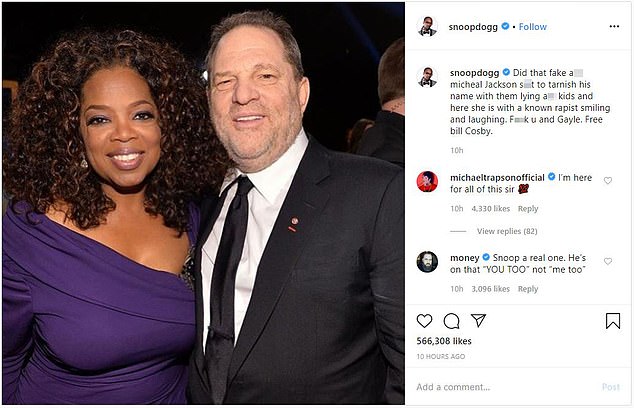 In her original interview, King had asked Leslie if she believed that Bryant’s legacy was ‘complicated’ because of the 2003 rape allegation.

Leslie replied to King’s question to say ‘It’s not complicated for me at all’ adding that she doesn’t believe Kobe was the ‘kind of guy’ to ‘violate a woman or be aggressive in that way’.

Bryant reportedly asked the young woman, 19, a concierge at the hotel Bryant was staying, for a private tour. After the tour, Bryant invited the woman to his room where they began kissing.

Bryant asserted that they had consensual sex, but the woman said it was rape.

The woman later reported the alleged rape, with authorities finding bruises on her neck and tears to her vaginal wall.

Flanked by lawyers and his wife, Vanessa Bryant, he admitted to committing adultery, but maintained his innocence at the allegations at a press conference. He later entered a not guilty plea.

The criminal case never went to trial as the woman refused to testify in court, but Bryant later settled with the woman in civil court.

King has responded to the backlash about the question saying that the clip released by CBS took ‘the most salacious part’ of the interview with Leslie out of context.

CBS insists ‘changes have already been made’ to its internal processes after King slammed her own network for the way it promoted part of her interview. 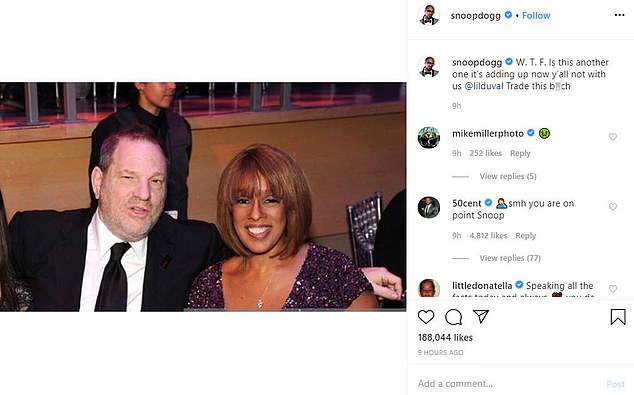 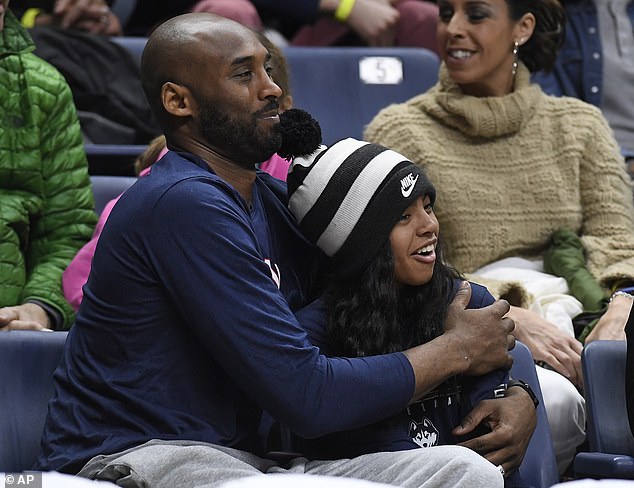 The late Kobe Bryant, pictured with his daughter Gianna, was accused of rape in 2003

Others who have highlighted Bryant’s rape allegations have received overwhelming backlash.

Actress Evan Rachel Woods received intense condemnation after sharing a tweet about Bryant on the day he died. ‘I am heartbroken for Kobe’s family. He was a sports hero. He was also a rapist. And all of these truths can exist simultaneously,’ she said.

A Washington Post reporter was suspended from her job for tweeting a link to a past Daily Beast article that examined Bryant’s case.

Bryant, 41, his 13-year-old daughter Gianna and seven others died in a helicopter crash around 10am on January 26. The nine victims also included: John Altobelli, a baseball coach at Orange Coast College, his wife Keri and their daughter Alyssa; basketball coach Christina Mauser; Sarah Chester and her daughter Payton; and the pilot Ara Zobayan.

Cosby is currently serving a three to ten year sentence in Pennsylvania for sexual assault. He was convicted of three counts of aggravated indecent assault in 2018 for drugging and sexually assaulting Andrea Constand in his home in January 2004.

He has also been accused of rape and sexual assault by over 60 women.

This is not the first time Cosby has left social media users bewildered as to how he is able to post from behind bars. On Father’s Day in 2019, he tweeted to say he is ‘America’s Dad’ leading to plenty of backlash from angry Twitter users.

At the time, a spokesperson for Cosby said that the actor does not have access to his social media accounts but from prison had requested his team post the message.