It’s the most direct, negative ad aired to date by any leading Democratic presidential contender against a primary rival. The ad reflects a new sense of urgency in Biden’s campaign to slow Buttigieg’s momentum and cast doubt on his electability and readiness for the presidency. Biden and his aides have said they expect to lose New Hampshire, too — but his campaign is looking to regain its footing as the race moves to Nevada and South Carolina later this month.

The ad starts with a narrator saying: “When President Obama called on him, Joe Biden helped lead the passage of the Affordable Care Act. And when parkgoers called on Pete Buttigieg, he installed decorative lights under bridges, giving citizens of South Bend colorfully illuminated rivers.” 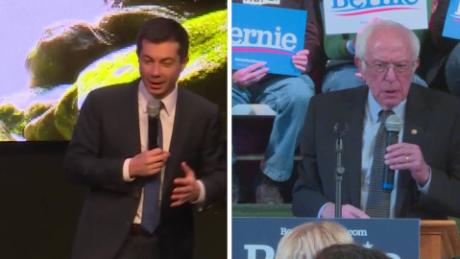 The comparisons include Biden’s help in negotiating the Iran nuclear deal and his work on the Recovery Act. “Both Vice President Biden and Mayor Pete have helped shape our economy,” the narrator says facetiously, saying that while Biden helped revitalize the economy by passing the Recovery Act, Buttigieg revitalized South Bend’s economy by laying out “decorative brick” on the sidewalks.

The ad also knocks Buttigieg’s record on race in South Bend, taking direct aim at the former mayor’s biggest weakness in the Democratic presidential race: his lack of support from non-white voters.

Buttigieg appeared to respond to the ad on Saturday at an event in Hanover, New Hampshire.

Without naming Biden, Buttigieg said, “I know some folks are out there saying, ‘What business does a mayor of South Bend have running for the presidency? You don’t have an office in Washington. Your community is a little out of the way.'” 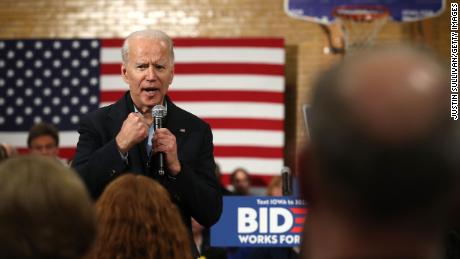 “What I’m saying is that that’s exactly the point,” he continued. “Right now there are so many communities, so many Americans, small and medium-sized cities like mine, and neighborhoods in some of the biggest cities in the country, that feel like Washington can’t even hear us.”

“I’m here to carry those voices to Washington, to bring solutions not from Washington but to our nation’s capital, because I believe that we would be well-served if we could start to get Washington to work a little more like our best-run cities and towns rather than the other way around,” Buttigieg said.

Buttigieg national press secretary Chris Meagher responded to the ad in a statement, writing, “At this moment, the American people are crying out for something completely different from this classic Washington style of politics. While Washington politics trivializes what goes on in communities like South Bend, South Bend residents who now have better jobs, rising income, and new life in their city don’t think their lives are a Washington politician’s punchline.”

Meagher continued, “Pete’s on the ground experience as mayor, turning around a Midwestern industrial city, is exactly why he is running for president. The Vice President’s decision to run this ad speaks more to where he currently stands in this race than it does about Pete’s perspective as a mayor and veteran.”

Mayors who support Buttigieg’s presidential campaign criticized the ad, saying that Biden was diminishing the importance of voices from small cities and towns.

Christine Hunschofsky of Parkland, Florida, wrote, “my city is Parkland, FL, with 33,000 residents. What happens in our cities matter too. This arrogant, disrespectful and dismissive tone is exactly what our country, our cities and our residents do not need.”

Waterloo, Iowa, Mayor Quentin Hart said: “As Mayor of Waterloo with a population of 68,000 are you saying that voices from cities like mine don’t matter? All communities matter whether small or large.”

Buttigieg defended his experience in a debate Friday night in Manchester, saying he brings “a different perspective.”

“Look, I freely admit that if you’re looking for the person with the most years of Washington establishment experience under their belt, you’ve got your candidate, and of course it’s not me,” he said.

He highlighted his military service — Buttigieg deployed to Afghanistan as a US Navy Reserve officer — and time as mayor in an old manufacturing city.

“The perspective I’m bringing is that of somebody whose life has been shaped by the decisions that are made in those big, white buildings in Washington, DC; somebody who has guided a community written off as dying just a decade ago through a historic transformation; somebody who knows what it means to be sent to war on orders that come out of the Situation Room,” he said. “We need a perspective right now that will finally allow us to leave the politics of the past in the past, turn the page, and bring change to Washington before it’s too late.”

Biden’s shift in tone comes directly after he admitted a “gut punch” defeat in Iowa, coming in fourth in the state’s caucuses. Wednesday at an event in New Hampshire, Biden singled out Vermont Sen. Bernie Sanders and Buttigieg during a speech, warning attendees that Sanders would hurt Democrats running in down ballot elections because he is a democratic socialist and admonishing Buttigieg for what he described as criticism of President Barack Obama’s presidency.

And at the Democratic Debate Friday, Biden seemed to downplay expectations in New Hampshire. “It’s a long race. I took a hit in Iowa and I’ll probably take it here,” he said, acknowledging that the “neighboring senators,” namely Sanders and Massachusetts Sen. Elizabeth Warren, are poised to do well because of their geographical advantage.