The “CITGO 6” — Tomeu Vadell, Gustavo Cardenas, Jorge Toledo, Alirio Zambrano, Jose Luis Zambrano and Jose Angel Pereira — were taken by the Maduro regime’s intelligence services from their separate house arrest locations, according to several family members, Vadell’s legal team, and the State Department. According to the legal team, they were removed “without warnings or judicial order” and are being held together in the same cell at El Heliocoide prison, even though “the house arrest has not been revoked by the appropriate court.”

“Lawyers and relatives were not informed, and the only information shared by the SEBIN officials on duty was that [they were taken away] ‘for medical checks,'” the lawyers’ statement said referring to the Venezuelan intelligence service.

The US State Department condemned the move and called for their immediate release.

“The safety and health of Americans is always a top concern for the Department of State. We’ve learned that the CITGO 6 have been taken from house arrest by the regime’s intelligence agency SEBIN and believe they’re now detained at its Heliocoide prison,” Special Representative for Venezuela Elliott Abrams told reporters at the State Department Thursday. “We condemn this cruel and indefensible action and demand that their long unjust detention come to an end and that they be allowed to leave Venezuela.”

Abrams would not speculate on the reason behind the timing of their removal from house arrest. He said the administration became aware of the movement from one of the families.

Speaking to CNN, Venezuelan Attorney General Tarek William Saab said he was not in condition to comment on the case. Saab is expected to hold a press conference on Friday to discuss developments in the case.

The six executives — five of whom are US citizens and one of whom is a legal permanent resident — were arrested and detained on corruption charges in November 2017. They were moved from a notorious detention facility where they had been held without trial to
house arrest in mid-December 2019. Abrams noted that they were under “constant surveillance” while under house arrest and “It would not be unreasonable to assume that they were being bugged.”

‘We’re working as hard as we can’

Family members who spoke with CNN said they are concerned about the safety and well-being of the CITGO 6.

“We’re just really stressed out,” Jorge Toledo’s son Carlos Gustavo said Thursday. “We have no idea how my dad’s doing, if he has access to food or water.”

He said his message to his father was that “we’re working as hard as we can and we haven’t forgotten about him.”

Tomeu Vadell’s daughter, Veronica Vaddell Weggeman, echoed this concern, noting that “we have no idea what this place entails.”

“I’m concerned he didn’t take his medication with him,” she said. Both Jorge Toledo and Tomeu Vadell’s children told CNN that they have medical conditions. 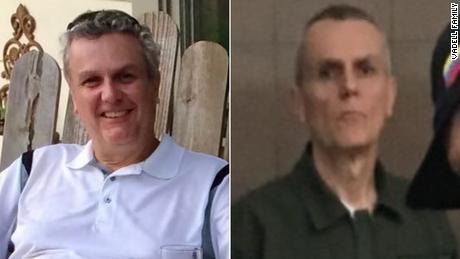 They also questioned the timing of the move as it related to Guaido’s visit to the US, with Gustavo saying it seemed “a little too coincidental.”

“We are concerned that we are going to continue getting caught in this political storm,” Vadell Weggeman said. “My dad is a mechanical engineer. Nothing to do with politics.”

Abrams noted that the State Department “had made a number of efforts” to get more information on the case and secure their release on Thursday, but said he could not get into details. Efforts by the US government to free the men have been unsuccessful and complicated by the precarious political situation in Venezuela. The US recognizes Guiado, not embattled President Nicolas Maduro, as the leader of Venezuela and has not had any representation in the country since US personnel were ordered to depart in March 2019.

All six of the men are employees of CITGO, which is the US subsidiary of the Venezuelan oil and natural gas company PDVSA. In a statement, the company said it “continues to support the U.S. Government’s efforts to secure the release of our colleagues, who have now been detained for more than two years without trial.”

“CITGO believes that the detention of these men violates their fundamental human rights, including the right to due process under law. We pray for their safety, and for their families as they contend with all of the challenges presented by this lengthy separation from their loved ones. We continue to support the detainees’ families, and we are grateful for the efforts of this Administration and lawmakers on both sides of the aisle to bring these men home,” it said.