Trump denied that Mulvaney is on the outs, telling reporters Friday on the South Lawn: “That’s a false report.”

Mulvaney himself is increasingly unhappy in the role, aware it has been diminished from previous chiefs of staff, people familiar with the dynamics said. According to several sources familiar with the matter, the President — who has never graduated Mulvaney from his “acting” role — often ignores Mulvaney’s input and has opted on multiple occasions to do the opposite of whatever he suggests.

It’s not clear when or if Mulvaney will depart his post, and sources were split on whether his exit was now imminent or he would remain in place through November’s election. But discussions about his future have ramped up among staffers as the post-impeachment chapter of the Trump era begins.

A White House spokesman said they have no personnel announcements at this time and said the President is focusing on “delivering results for the American people” now that Trump’s trial is over.

“It’s unfortunate but not surprising that at the end of a week when the President was totally acquitted, CNN is turning to palace intrigue stories. As he indicated in his State of the Union address this week, President Trump is focused on delivering results for the American people. We have no personnel announcements at this time,” said White House deputy press secretary Judd Deere in a statement. 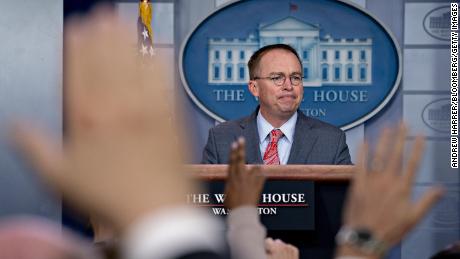 Over the past weeks, Mulvaney has taken an active role in the administration’s efforts to
contain the coronavirus outbreak that originated in China. And he travels regularly with the President when Trump leaves town. But Mulvaney was not a visible presence in the impeachment proceedings, during which he was locked in an internal feud for influence with White House counsel Pat Cipollone.
His appearances in the media declined sharply after
a disastrous news conference in October, when he acknowledged a quid pro quo in Trump withholding aid to Ukraine in exchange for an investigation into Joe and Hunter Biden. Privately
Trump was enraged by the performance, which Mulvaney attempted to walk back afterward.

The damage from the news conference lingered for months, including during the impeachment trial, when clips of it aired repeatedly during the House managers’ presentation, irking Trump further.

Trump has grown increasingly frustrated with Mulvaney in recent months, and people close to Mulvaney have worried the onetime South Carolina congressman would not remain long after impeachment is over. Officials close to him have acknowledged that they don’t expect much warning if he is indeed axed by the President, mindful that past firings and forced resignations have been quite sudden.

Mulvaney is the third person to sit in the chief of staff’s office during Trump’s first term. His predecessors, Reince Priebus and John Kelly, each left after losing influence with the President. While Kelly had sought to enforce strict discipline in the West Wing after a looser approach from Priebus, Mulvaney has eased those restrictions, allowing a more freewheeling style to take hold.

When Mulvaney departs could depend on who’s in line to take his place. 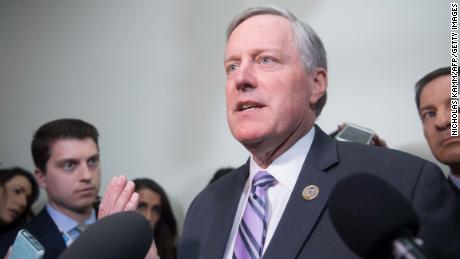 When it comes to filling the chief of staff role after the impeachment dust settles, Trump has suggested his first choice remains
Meadows, sources familiar with the talks said. The North Carolina Republican has been advising the President daily during the impeachment. Meadows also has the support of Jared Kushner, the President’s son-in-law and senior adviser, among other crucial aides. A source close to Meadows said he has not aggressively pursued the post.

During Thursday’s post-acquittal speech, Trump thanked Meadows at length for his support during the impeachment proceedings and called him “an extraordinary guy” and “very special.”

Meadows, in turn, was the only other person who spoke during the President’s address — rising from his seat in the audience to praise Trump.

“I just wanted to say that this reflection today is a small reflection of the kind of support you have all across the country,” Meadows said. “We’ve got your back.”

Mulvaney was in the audience, but Trump did not single him out during his remarks.

Meadows and Mulvaney remain close, and they sat in adjacent seats during a charter flight from Iowa following a flood of Trump surrogates during the state’s caucuses.

While Meadows has not turned down the chief of staff role, in private conversations the staunch Trump ally has at times expressed interest in a different position, such as the one created at the beginning of Trump’s presidency for Steve Bannon, former White House chief strategist. Such a job, a person familiar said, would allow him to advise the President in an official capacity without saddling him with the responsibilities and blame that come with the chief of staff position. Others have cautioned that could replicate the toxic dynamic that once existed between Bannon and Priebus.

Multiple sources also said the option of taking an advisory position outside the White House was still on the table, preserving the possibility for Meadows of something official within the administration post-reelection.

Ultimately, people familiar with the dynamic believe that if Meadows does join the White House staff, it will be for the top job.

There is also a chance that if Meadows isn’t ready to take the chief of staff job now, Mulvaney could remain in place. Trump is cautious about a repeat of the 2018 episode when he offered the chief of staff job to Nick Ayers, the top aide to Vice President Mike Pence, only to be turned down. Trump instead selected Mulvaney, who he is now wary of pushing aside without a clear replacement.

Another name sources have mentioned as an option to replace Mulvaney is Eric Ueland, the legislative affairs director, though his prospects appear to have diminished in recent days.

His own best adviser 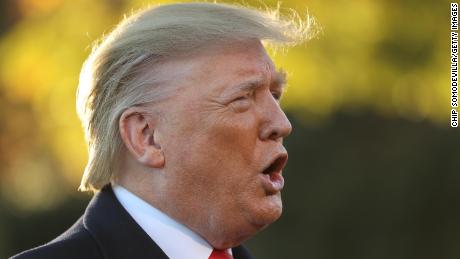 Regardless of who succeeds Mulvaney, there is a clear sense inside the White House that the President, in the wake of his Senate acquittal, will increasingly rely on himself rather than any adviser. The President is increasingly confident in his own instincts and
finds himself more unbridled than at any point previously in his presidency.

A series of issues that were largely put on hold during the impeachment saga are set to bubble to the surface. Most pressing, aides say, is containing the coronavirus outbreak in China. Administration efforts to combat the virus and prevent it from entering the US are already well underway. But some administration officials acknowledge there will be greater attention on the subject now that impeachment is over.

Next week the White House will present its yearly budget, which will be closely scrutinized as a list of administration priorities. Already, a dust-up ensued after the administration signaled it could propose cutting foreign aid to Ukraine, forcing it to announce the money would stay at current levels. The White House is planning a traditional rollout for the budget proposal.

Trump himself is itching to ramp up his campaigning as the election year gets underway. He’ll be in New Hampshire on Monday, the eve of that state’s first-in-the-nation primary. And officials say he’s eager to add more events to his schedule, particularly as the Democratic race heats up.

One official said to expect at least one rally a week for the rest of the year. And though much depends on his other commitments, Trump has told aides he wants to eventually return to the pace he kept during the 2016 campaign.

The President is also expected to scale up his fundraising efforts, including an upcoming West Coast swing.

Trump will travel to India in the coming weeks on a state visit, where he’ll boost Prime Minister Narendra Modi, despite concerns over his overly nationalist bent. But there isn’t a whole lot of other foreign travel on tap for the rest of the year, particularly because the G7 summit will occur this June at Camp David.

This story has been updated to include additional reporting.