Latest News
Home /Cosmopolitan cancels its digital cover with Bachelor contestant Victoria Fuller after discovering she modeled a White Lives Matter slogan – CNN
Fuller won the prize of being featured on Cosmopolitan’s digital cover, alongside
Bachelor Peter Weber, in Monday’s episode. Both are contestants on this season of popular reality TV show “The Bachelor.”

Pels acknowledged that some have said the campaign was for a Marlin Lives Matter organization, focused on preventing the overfishing of white and blue marlins. As a result, the phrases “White Lives Matter” and “Blue Lives Matter” were used in its promotional products.

“In my view, the nature of the organization is neither here nor there — both phrases and the belief systems they represent are rooted in racism and therefore problematic,” she wrote. “Unequivocally, the White Lives Matter movement does not reflect the values of the Cosmo brand. We stand in solidarity with Black Lives Matter, and any cause that fights to end injustices for people of color.”

Pels, who appeared on Monday’s episode, said she knew nothing about the contestants when she chose Fuller — only their first names and the “energy they conveyed through the camera lens.”

She discovered the ad campaign a few weeks ago. “My team and I had many long discussions” about how to proceed, Pels said. 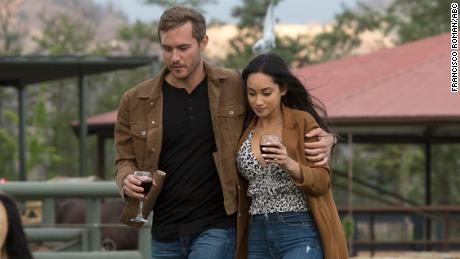 Cosmopolitan has already printed the fashion shoot in the March issue, she wrote.

“Ultimately what felt right was choosing not to publish the digital cover on our website or social feeds, and simply being honest with you, the audience we respect, about what happened and where we stand,” Pels wrote, concluding the letter.

Weber, this season’s “Bachelor,” spoke about the incident in an interview Tuesday
with Yahoo’s Build Series. He didn’t know many details about the situation, he said, but maintained that Fuller is a good person and asked fans to form their opinions based on what they see on the show.