But the former vice president limped to New Hampshire on Tuesday on course to lose in the first contest of the 2020 primary.

The results that have been tallied so far are worse than Biden — who had told reporters the Friday before the caucuses that “there’s a big difference between second and fourth” — had hoped. And popular vote numbers indicating Biden fell behind the 15% viability threshold to win delegates in some precincts were a clear indictment of his campaign’s weak organizing effort in the state.

The former vice president must now answer new doubts about his core argument: If a candidate who has framed his campaign around the notion that he’s more electable than his rivals loses the first election of the nominating process,where does that leave him?

Biden’s campaign is bracing for a protracted battle, hoping his support from black and Latino voters will provide the former vice president a boost. His support from non-white voters is his campaign’s most important asset, and one aides have said for months could allow Biden to weather losses in one or two early-voting states with overwhelmingly white electorates.

In a call with donors Tuesday led by campaign manager Greg Schultz and top adviser Steve Ricchetti, the Biden aides said he is “well-positioned to win” the third and fourth contests in Nevada and South Carolina, a source familiar with the call said.

His aides in Philadelphia are also readying a Super Tuesday plan focused on building a delegate advantage in congressional districts with large non-white populations. 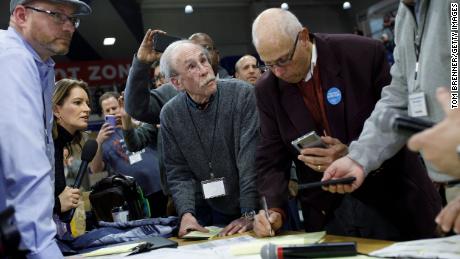 Meanwhile, Biden is starting his week-long sprint through New Hampshire, where the most recent poll before the Iowa results, from the Boston Globe and Suffolk University, showed him at second place with 18% support behind Sanders’ 24%.

In his first campaign stop Tuesday, Biden sounded relieved to have moved past Iowa.

“God, it’s good to be in New Hampshire,” Biden said as he began his speech in a Girls Inc. gym in Nashua. “You have no idea how happy we were to be headed to New Hampshire and Nashua.”

He also showed a new willingness to attack Sanders by name and at length, adding to his stump speech a much lengthier critique of the Vermont senator’s “Medicare for All” plan. 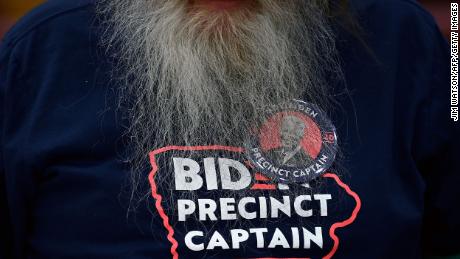 It was the beginning of Biden’s bid to turn the page on a disappointing showing in Iowa.

The 77-year-old third-time presidential contender took a sluggish, front-runner’s approach there. He held no more than two or three events per day, and the crowds at those events — consistently dwarfed when his leading rivals campaigned in the same cities and towns — were a sign of trouble: Democratic voters there lacked enthusiasm for the former vice president.

The political punditocracy typically downplays crowd size as a measurement of candidate support. After all, in 2016, Sanders drew 26,000 people to a rally in New York, and then was walloped by 16 percentage points by Hillary Clinton in the state’s primary.

But crowd size can have strategic importance: Candidate appearances are a major way campaigns attract precinct captains and door-knocking and phone-banking volunteers. And it remains one gauge of enthusiasm for a candidate — and in town after town across Iowa, Biden was routinely outdrawn by every other major rival.

His campaign insisted it was no problem. Biden’s supporters are older and less likely to sit through candidate appearances, aides said.

“There are multiple types of passion, and you all just cover one type,” former Iowa Gov. Tom Vilsack, a former Obama agriculture secretary who campaigned with Biden in the closing days, told a reporter after a recent Biden event. “And I get ticked off when they do this. I am incredibly passionate about Joe Biden, but I’m not hootin’, hollerin’ guy. I’m just not. I never have been, never will be. But don’t tell me I’m not as passionate as any one of those folks that’s going to those Buttigieg events or Warren events. And that’s true of a lot of these folks who are here today.”

While Biden’s rivals were willing to draw contrasts with each other, Biden typically ignored his foes — and questions about other Democratic candidates from reporters who followed his final eight-day, 21-stop bus tour through Iowa. 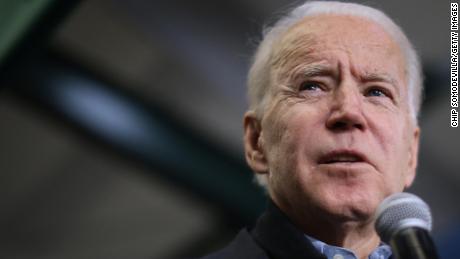 Only in the race’s final days did he begin offering sharper distinctions, foreshadowing how he could soon confront Sanders, Warren and Buttigieg more aggressively.

“How can we beat Trump if we’re not perceived as being totally authentic with the American people about what we’re gonna do and how we’re gonna do it?” Biden said Saturday in Cedar Rapids. “What it’s gonna cost and who’s gonna pay?”

Biden had not met the viability threshold in a Johnston precinct where Melanie Weatherall, a 50-year-old former nurse, said she caucused.

She said she was “very discouraged, because people aren’t waking up — they don’t understand.”

“I keep talking to people until I’m blue in the face, because none of them can beat Trump or Republicans,” Weatherall said. “So we’re going to be stuck with Donald Trump another four years.”

Then there’s money:
Biden already lagged well behind his rivals in fundraising. His $22.7 million fourth-quarter haul was behind Sanders’ $34.5 million, just behind Buttigieg’s $24.7 million and slightly ahead of Warren’s $21.2 million. His $8.9 million cash on hand trailed all his major rivals — and was half of Sanders’ $18.2 million.

Looming large is former New York City Mayor Michael Bloomberg, who has already spent $200 million on his own campaign and signaled he’s willing to spend much more — particularly if Biden appears weak as the race reaches Super Tuesday in four weeks. Also present is another billionaire, Tom Steyer, who has climbed into the double digits in recent South Carolina polls and made inroads with black voters. 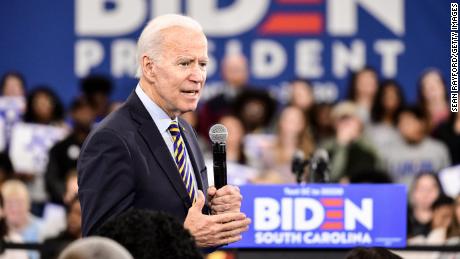 Biden entered Monday night with one significant advantage over the rest of the field: He has by far the most support among black voters. A late January Quinnipiac poll found Biden with 49% support among African-Americans nationally, with Sanders second at a distant 17%.

His campaign has long relied on the prospect of a massive win in the February 29 primary in South Carolina, where a majority of the Democratic electorate is black, to propel him forward into Super Tuesday three days later. Fourteen states vote that day, including California and Texas with large non-white populations and a spate of heavily African-American southern states: Alabama, Arkansas, North Carolina and Tennessee.

“South Carolina can and should be a place of rehab and relaunch for him,” said Antjuan Seawright, a Democratic strategist in South Carolina. He said he thinks Biden’s support among black voters will withstand Iowa’s results. 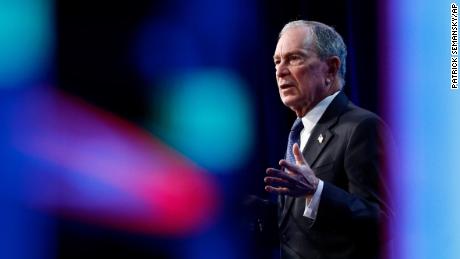 Biden’s aides acknowledged that, as in every nominating contest, momentum from the first four contests — Iowa, New Hampshire, Nevada and South Carolina — will be crucial on Super Tuesday.

The results in the first four states are especially important, one senior aide said, to four Super Tuesday states with substantial early-voting or voting by mail: California, Texas, North Carolina and Colorado.

However, the aide said of the first four states: “We are one of the few candidates who has a really viable pathway that doesn’t involve emerging from all of these contests as a winner.”

Biden’s campaign has hired state directors or senior advisers in half of the states that vote on Super Tuesday, and plans to lean hard on the political networks of his 300 endorsers the 14 states that vote along with Democrats Abroad and American Samoa on March 3, two senior aides said.

The former vice president’s campaign is preparing for a drawn-out delegate battle, and aides say as they’re planning for Super Tuesday, their focus is on congressional districts — rather than statewide wins.

Biden faces a difficult organizational challenge: Sanders, who has a large volunteer army, is already advertising in California and Texas. Warren dispatched aides early to Super Tuesday states. Bloomberg’s billions of dollars are already swamping the airwaves in those states.

In a multi-candidate race, Biden’s campaign thinks it can build an advantage in places where some contenders are short of the 15% mark required to be awarded delegates. That, the aides said, means majority-minority districts and diverse districts across the South. It also means an emphasis on places like Tennessee and North Carolina, where Democratic voters tend to be more moderate.

Aids pointed to the Birmingham-based Alabama 7th District as an example: It’s a majority-minority district where Biden has endorsements from the local member of Congress and the Birmingham mayor, and where Hillary Clinton netted all nine delegates in the 2016 primary.

Biden’s campaign has hired state directors or senior advisers in seven of the Super Tuesday states: California, Texas, Virginia, North Carolina, Massachusetts, Colorado and Minnesota. Aids would not say how many total staffers are on the ground in Super Tuesday states.