With the opportunity to grab the highest audience of the year, Fox elected to unveil a new graphics package for Super Bowl LIV and it led to some interesting moments for viewers. Joe Buck and Troy Aikman calling their sixth Big Game together had a good solid broadcast. However, there were some glitches that were quite obvious to viewers accustomed to seeing a clean production.

Let’s get into the nuts and bolts of the broadcast: 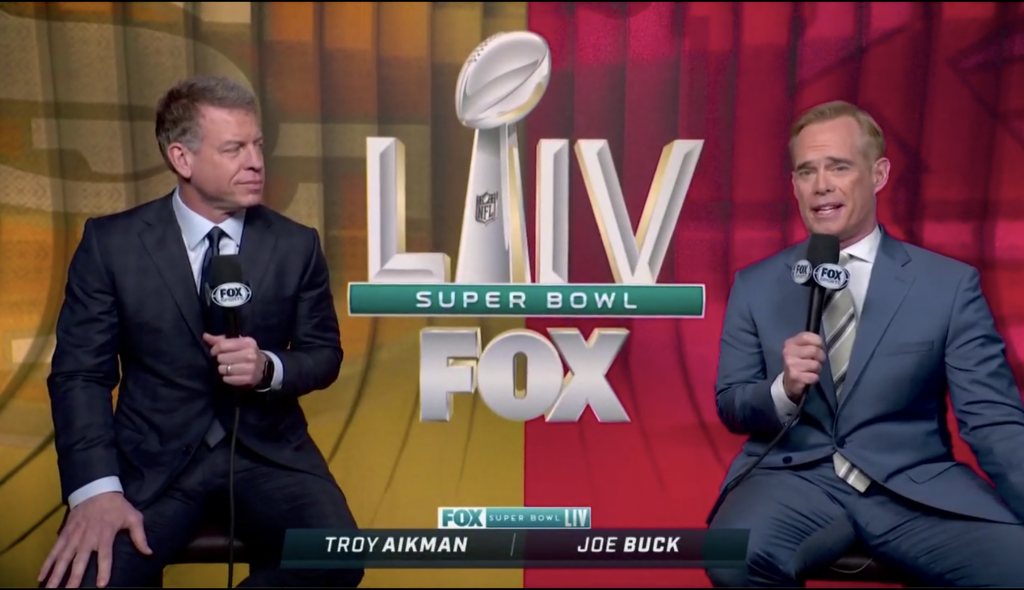 They’ve become this generation’s Pat Summerall and John Madden as the Voices of the NFC. Believe it or not, they’ve called the Super Bowl on Fox dating back to 2005 and Sunday was their sixth time calling the Super Bowl, the most of any current broadcast team.

Unlike last year when CBS’ Jim Nantz and Tony Romo had to wade their way through a dull quagmire of Super Bowl LIII, Buck and Aikman were blessed with a very good game which was in doubt until the very end when Damien Williams’ touchdown put an exclamation point on a Kansas City Chiefs victory.

The duo was mostly on top of trends and Aikman questioned San Francisco 49ers coach Kyle Shanahan for his decision not to call a time out late in the first half when the Chiefs had the ball allowing Kansas City to run the clock down which would have given San Francisco more time to drive for a potential score. Erin Andrews had an opportunity to address this with Shanahan during the after-halftime interview, but she didn’t do so.

When Jimmy Garoppolo seemingly completed a pass to tight end George Kittle, Aikman was quick to point out that there was offensive pass interference.

That was later confirmed by rules analyst Mike Pereira.

As San Francisco was up 20-10 on the Chiefs, Buck pointed out Kansas City’s postseason comebacks in the Divisional and Conference Championship games while Aikman was more cautious. Both pointed out how poorly Chiefs quarterback Patrick Mahomes had played until late in the fourth quarter. And when the Chiefs were on their way to a win, Buck reviewed some of the players who had been with the franchise in between the team’s wins in Super Bowl IV and Super Bowl LIV.

Replays were on-point, especially when it looked like Tyreek Hill caught a pass, but replay showed the ball hit the ground. Rules analyst Mike Pereira was used minimally, but there weren’t too many opportunities to have his analysis except for a few occasions.

Fox waited way too long to go to Mike Pereira, who’s there for this exact purpose, after that play

Fox quickly went to break when during a normal regular season game, the network would take the extra time to have either Pereira or Dean Blandino to discuss a review, however, Buck would have to recap and quickly go to the next play. That’s the consequence of jamming in as many spots at $5.6 million per ad.

For good measure, we give you the clinching touchdown scored by Damien Williams as called by Adrian Garcia-Marquez on Fox Deportes.

Someone get control of the yellow line person pic.twitter.com/6YZ29rYI0f

Awful Announcing’s Andrew Bucholtz looked at Fox’s new graphics package that was unveiled during the Big Game. We noticed there were a few strange issues with the Super Bowl broadcast. The 1st and 10 line, which normally is meticulously placed at or near the first down marker, was not in the proper location on a few instances in the first half. It’s a good thing that Mahomes could not see the yellow line otherwise he would have been short of the first down.

Remember: the yellow line is not official! pic.twitter.com/z5GnFk08HG

It was later corrected, but it was odd not to see it line up correctly.

Fox’s production, for the most part, was on target. However, unveiling a new graphics package during the Super Bowl featuring a new scorebug, cartoons instead of pictures representing players, plus new down and distance fonts might have appeared strange to viewers used to seeing Fox’s old graphics during the regular season through the NFC Championship.

Could these features have been unveiled perhaps during the playoffs to get people used to seeing them? Maybe, but this has been Fox’s and the other NFL partners’ preference.

Next year, CBS is back after trading Super Bowl LVI in 2022 to NBC in exchange for Super Bowl LV and we will be ready to review the production.