Colby Covington is back. The former welterweight interim champion showed up on Ariel Helwani’s show for the first time since his loss to Kamaru Usman. And he had some interesting outlooks towards the title fight against Usman.

Covington believes that Usman made fake excuses to steal the momentum from Covington during the fight. Usman faked a nut shot in the second round when Covington was having great success and he also faked an eye poke in the third round. Covington strongly feels that he was winning the fight until referee Marc Goddard stopped the fight even if Covington was not hurt. However, that is in the past and Covington wants to run it back again. 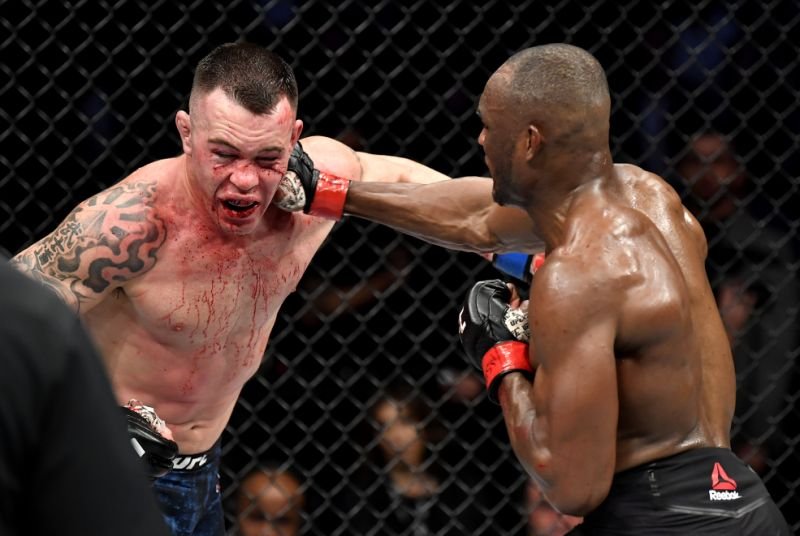 Read: Colby Covington blasts Kamaru Usman for faking the nut shot in round 2

Colby Covington calls out 50 Cent to a celebrity boxing fight

However, that’s not the only fight Covington wants upon his return. He wants to fight the famous rapper, 50 Cent for all the trash talk the rapper did after Covington lost the fight at UFC 245.

Colby Covington claimed that he did not break his jaw in his fight against Usman. But he does want to break 50 Cent’s jaw for mocking him post-fight. Colby stated:

“Nah, does my jaw look broken. I’ve been smiling. The only person that has his jaw wired shut is ‘50 Cent.’ If you want to talk about people who had to get their jaw wired shut let’s talk about him. He says he got shot nine times, if you got shot one time by me you wouldn’t get back up. ‘50 Cent’ is a little bi**h.”

“I want to do a celebrity boxing match. I’m going to tie one hand behind my back and I’m going to fight 50 Cent. I’m going to put up one million of my dollars.”@ColbyCovMMA says he’ll let @50cent choose which hand too (via @arielhelwani) pic.twitter.com/oqkdUI6dZD

Covington wants to fight 50 Cent under some special rules. He agrees to bet his 1 million dollars in the fight and he also said that one of his hands will be tied behind the back. yet he believes that he will be able to beat 50 Cent. Covington also claimed that the money he wins from the fight will be donated to the US troops.

“He came out after the fight talking mad crap on me. Talking all this smack all this MAGA talk, putting all these Instagram posts up,” he said. “So I am ready to do a celebrity boxing match. I will tie one hand behind my back and I will fight ‘50 Cent’ and put up a million of my dollars to fight him in a celebrity boxing match. And I am going to give all the money to the troops because I love the troops so much.” Covington continued.

Now it’s very unlikely that we are going to see the fight take place. However, 50 Cent has few rivalries in the past with other MMA fighters such as Conor McGregor and Rampage Jackson. So fans can expect a response from 50 Cent soon.