The 54-year-old woman, whom officials haven’t named, was traveling on Interstate 95 in South Carolina when her car got a flat tire, according to Colleton County Fire-Rescue. The woman from Charlotte, North Carolina, pulled over in the breakdown lane along the highway.

“She removed the flat tire and was replacing it with the spare, when the jack slipped causing the car to fall, crushing both of her hands between the tire and the fender,” the fire department said in a statement.

She was trapped alone along the side of the highway in excruciating pain, the department said. Over the next 35 minutes she was able to slip off her shoe and, after many attempts, dial 911 with her toes. 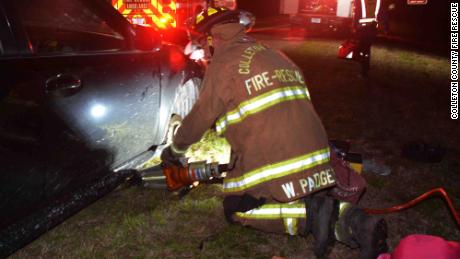 Emergency crews that were in the area clearing up from another accident arrived to get her free but encountered an issue.

“They used a prybar without success and then deflated the tire to remove the air, however the car just dropped as the tire deflated,” reads the statement. “Using the prybar, they were able to free one hand.”

Another fire engine arrived and successfully freed the woman’s other hand by using a hydraulic spreader.

The woman suffered severe damage to both hands and all her fingers, the fire department said. She was transferred to a local hospital for treatment.