With big crowds and determined supporters flocking to his events in the final days, Sanders projected the most momentum heading into the first-in-the-nation caucus. But the unique rules of the caucus and the sense that many voters were still making up their minds at this late hour created an air of uncertainty around the possible outcome on Monday night.

At most caucus sites, candidates must reach 15% to remain viable. If a candidate is not viable, his or her supporters can choose to caucus for another candidate. Who those caucusgoers choose to support in the re-alignment process can determine the outcome of the race — and makes predicting a winner based on the latest polling difficult.

The rules also place a premium on the strength of a campaign’s organization in the state. That was especially important for the senators who we’re being called back to Washington for President Trump’s
impeachment trial.

On Sunday, the Vermont senator was leading all of the other top contenders with $10.8 million spending on television (closely followed by former Buttigieg with $10.5 million). Emphasizing the strength of his organization, Sanders said the campaign knocked on 500,000 doors in January, no small feat in a state of 3.1 million people.

By Sunday afternoon, Sanders felt confident enough to predict victory on the eve of the caucus.

“We have spoken to tens and thousands of people, and we have put together an unprecedentedly strong grassroots, this is a moment I want to thank people of Iowa for their hospitality, and thank them for seriousness of purpose,” Sanders said in his third stop of the day at his campaign’s field office in Newton, Iowa. “We look forward to a victory tomorrow night … It’s not just our agenda, as strong and powerful as that agenda is, it is grassroots movement.”

Before Sunday, Sanders had predicated his chances of a win on the question of turnout. With unusually warm weather sweeping through the state, Iowa Democratic officials expect turnout to land somewhere between 170,000 (the attendance in 2016) and 240,000, the high-water mark that came in 2008 when the state gave a surprise win to Barack Obama.

But other top tier candidates in addition to Sanders — namely Warren and Buttigieg — have built strong organizations in the state that they hope will propel them to a strong finish.

At a raucous final town hall in Des Moines Sunday afternoon, Buttigieg took the stage forecasting victory for his campaign. He drew some of his biggest applause when making his standard request for the crowd to visualize the first day the sun comes up when Trump is no longer president of the United States.

“YES!” the crowd shouted in response.

“Are we ready to say goodbye to the tweets?”

“YES!” came the answer from the crowd.

Pleading with his supporters to get their friends and neighbors to the caucus, Buttigieg also implored his supporters not to give in to their fatigue with the fighting in Washington. He invoked Barack Obama’s legacy of hope — implicitly drawing the parallel to his own rise from obscurity to the top tier of candidates.

“I know why hope went out of style for a while in our political vocabulary in a dark and divided moment,” Buttigieg said. “I would also argue that you would not be here in the room right now if some sense of hope hadn’t propelled you into this space.”

“Are you ready to make history one more time tomorrow evening,” he asked. “Are you ready for that sunrise when we put the Trump era behind us … Iowa, starting tomorrow, I believe you are going to make me the next president of the United States.”

In a year when Iowa prognosticators have declared that there may be as many as four or five tickets out of Iowa, instead of the usual three, other candidates sought to downplay expectations. Former Vice President Joe Biden declared the race a “toss-up” and said the candidate with the best organization would determine the winner.

“I just wanted to say we’re in a red zone here,” Biden said joining a telephone conference call with organizers that CNN obtained access to. “I know the Super Bowl is today. We’re at the 10-yard line — and you know, a touchdown is the only way to win this thing right now.” 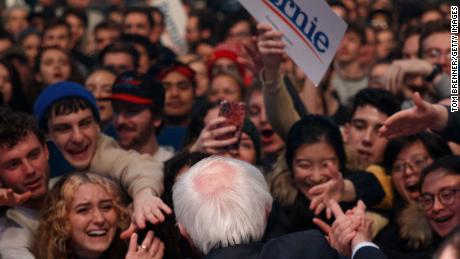 If the results are viewed as a “tie with two or three people at the top of the ticket,” he said, “We’re clearly in the game.”

During a late afternoon rally in Des Moines, Biden appeared with his wife Jill Biden, who drew applause from the crowd in introduction by noting that her husband will never back down from a fight with a bully.

“We’re in a situation now where everyone knows who Donald Trump is — we have to let them know who we are,” Biden said during his last rally in Des Moines Sunday evening. “We choose hope over fear. We choose science — science over fiction. We choose unity over division and we choose truth over lies.”

He added that there is no time for “on-the-job training,” reviving the argument that he has used against the much younger Buttigieg.

The former vice president also made an implicit swipe at Sanders, who has famously eschewed compromise at key points during his career, by stating that the nation needs a president who can bring Republicans, Democrats and independents together: “I refuse to believe that the other side is our enemy and not a competitor,” Biden said.

Farther east in Indianola, Warren made a vigorous last push to supporters, apologizing for having to forgo her typical selfie line — and offering her golden retriever Bailey in her stead as she barnstormed the state before returning to Washington for the impeachment trial.

She sought to calm any final concerns among Democrats about nominating a woman, declaring that the world changed after Trump was elected in 2016 with droves of women coming out to shift the power balance in the US House during the midterm elections.

Warren also offered heartfelt thanks to her supporters noting that she declared her run for the presidency a little over a year ago and declared in Iowa.

“In that time, we’ve done town halls; we’ve taken thousands of unfiltered questions; lots of selfies. Lots of notes you’ve pressed into my hands; lots of times you’ve stopped me on the sidewalk or out in parking lots,” Warren said. “I want to say thank you. Thank you for engaging, but also thank you for pushing us. You asked hard questions; you pushed on ideas.”

With both Sanders and Buttigieg burning through a considerable amount of campaign cash in the lead up to the caucuses, Minnesota Sen.
Amy Klobuchar touted her campaign’s frugality in one of her last events before leaving for Washington, noting that she wouldn’t be running an ad during the Superbowl.

“Here I am, one of the top five candidates In this race, and I’ve done it with a lot less money than a lot of my opponents and a lot less name identification and having not run for president before,” Klobuchar said. “We are frugal, that’s what you want in a president.”

The lower polling candidates were all hoping for an upset in the complex caucus system where voters are asked to realign with another campaign if their own candidate does not meet the threshold on the first vote.

They were emboldened by the fact that even as late as mid-January, about a half of Iowa caucus voters said they were still undecided. Some voters were still weighing their decisions Sunday, trying to game out which candidate has the best chance of beating Trump—which has been the dominant theme of this race for the White House.

Even in the hours leading up to the caucuses, some voters were still weighing their decisions, taking one final look at the candidates on Sunday night.

“It’s Amy or Pete,” said Val Dudley of Des Moines, who works as a buyer for a local furniture store. “I know that they’re looked at as underdogs, but they resonate with me. They’re a little more moderate and interested in finding middle ground.”

Dudley was deep in conversation with political tourists visiting Iowa from California on Sunday afternoon, waiting for a Buttigieg rally to begin. Later, she was heading to see Klobuchar at a Super Bowl party in the Des Moines suburbs.

She said she believes a moderate message will appeal to a broader cross-section of voters.

“Bernie makes me nervous, but all the young people in my family love Bernie,” she said, quickly adding that she would support the party’s nominee whoever it was. “We have to beat President Trump,” Dudley said. “We have no choice.”