Photos of the Staples Center show each seat draped with a yellow t-shirt with either a purple and white No. 8 or No. 24. Depending on which side of the arena the fans sit on determines which shirt they receive. Bryant wore both numbers playing for the team and the Lakers retired both at the end of Bryant’s career.

The Lakers tweeted an image of a logo — a circle with the initials KB inside — on the court, just outside the playing area. The circle and letters are in black and the KB is outlined in gold. There is a white star on the K.

On the tweet, the Lakers wrote: “The House That Kobe Built.”

In another tweet the Lakers posted a photo of a No. 28 jersey, currently worn by point guard Quinn Cook, with the logo on the right shoulder.

This will be the Lakers’
first game since Bryant died in a helicopter crash Sunday that killed everyone on board, including his daughter Gianna. 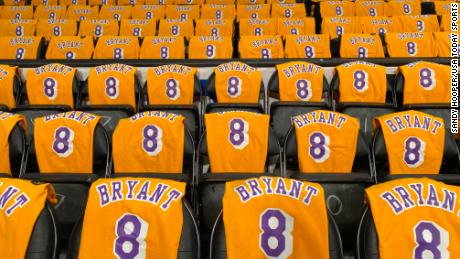 The
Lakers coach Frank Vogel said Thursday that his team was focusing on getting ready for game ahead of what is likely to be an emotional evening on Friday.

“We’re concentrating on the work,” he said. “There’s therapy in the work. Our whole belief since I got here is that we’re just going to put our heads down, roll our sleeves up and grind, and do the job.”

The team will make several other undisclosed tributes to the basketball star during the game, which is set to tipoff at 10:30 p.m. ET.