The FOMC made a technical adjustment, raising interest on excess reserves by 0.05% in an effort to keep the effective Federal Funds rate within their target range.

Perhaps more importantly, the Federal Reserve announced that purchases of T-bills will continue through Q2 of this year and repo operations, initially set to conclude around Jan. 15, will now extend through tax season in April.

The market highly anticipated both monetary policy decisions. Still, the Federal Reserve remains trapped, fighting a secular decline in GDP growth that’s out of their control with monetary policy tools that are entirely inappropriate.

Graphed below, we can see how nominal GDP growth has declined steadily since the 1980s. Tracking nominal growth avoids the debate surrounding the measurement of inflation. 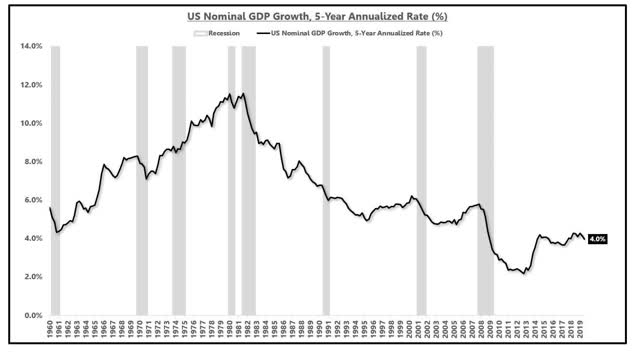 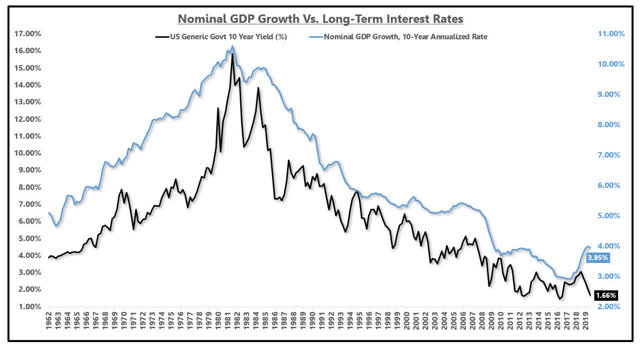 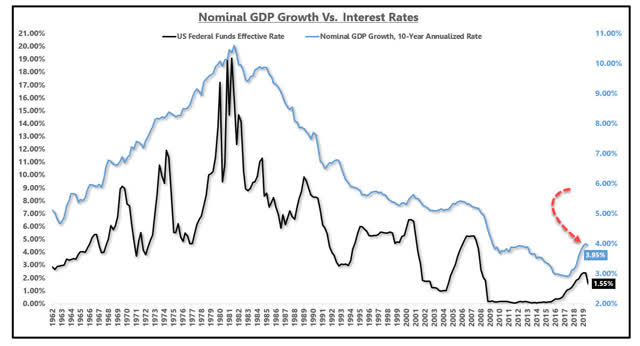 The Federal Reserve continues to lower interest rates to combat weaker rates of growth. At the same time, the federal government and private sector are endlessly accumulating debt to ease the pain of anemic growth. 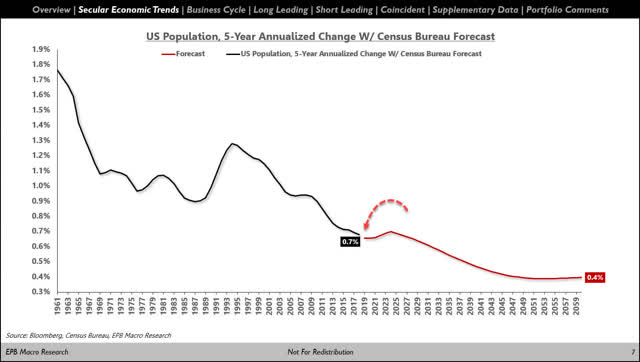 As the level of debt increases across all sectors of the economy, the velocity of money declines, and monetary policy becomes increasingly ineffective at stimulating short-term boosts to growth.

Total Public and Private Debt As A % Of GDP: 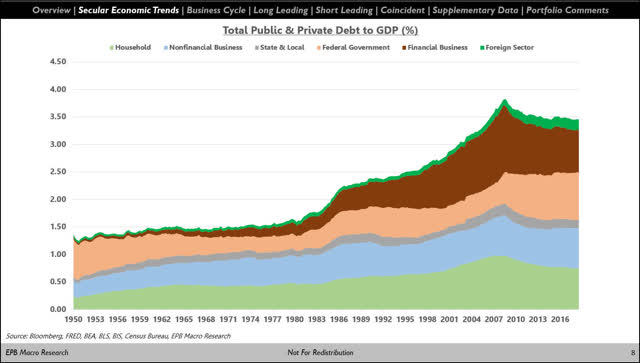 There is, however, a further reason not to be alarmed by the recent surge in money. The simultaneous acceleration in M2 and loan growth in response to QE1 was neutralized by a sharp decline in M2 velocity. This meant that the money and loan growth did not find its way into the real economy. That is happening again, with M2 velocity declining for the past five consecutive quarters. A large decline in velocity is also a high probability for the fourth quarter. In 2019, velocity was extremely close to the lowest levels recorded since 1950. As Fisher originally noted, velocity declines in highly over indebted economies.

Excessive levels of public and private debt begin to “crowd out” productive investment.

While the growth rate in real estate loans has improved with lower mortgage rates, economically sensitive C&I loans have shown a sharp drop in growth. 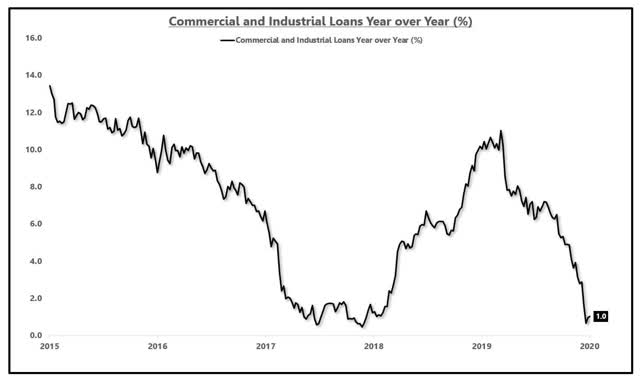 Total loans and leases across all commercial banks are also weakening in terms of growth, sitting at multi-year lows. 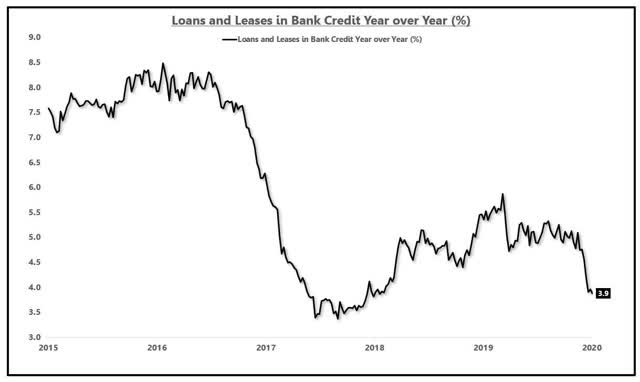 The rate at which Treasury securities piled up on bank balance sheets increased rapidly to a peak of nearly 20% year-over-year. The point at which the Federal Reserve stepped in to ease this burden and attempt to free up the private sector balance sheet can be seen at the end of the chart. 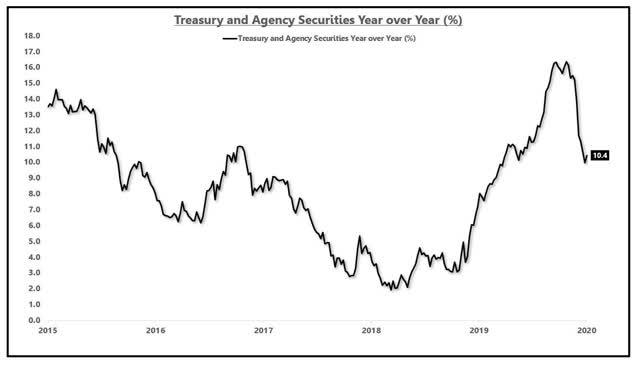 The Federal Reserve’s actions are unable to solve the secular decline in US economic growth. Declining rates of population growth and excessive levels of public and private sector debt that continue to crimp productivity growth will undoubtedly degrade total economic growth over time.

In a highly-leveraged economy, the central bank can always tighten monetary policy, but as interest rates move toward the zero-bound, the ability to stimulate economic growth is entirely ineffective.

The most recent FOMC announcement was nearly entirely expected. The Federal Reserve left its policy statement virtually unchanged, downgrading its assessment of the consumer from “solid” to “moderate.” 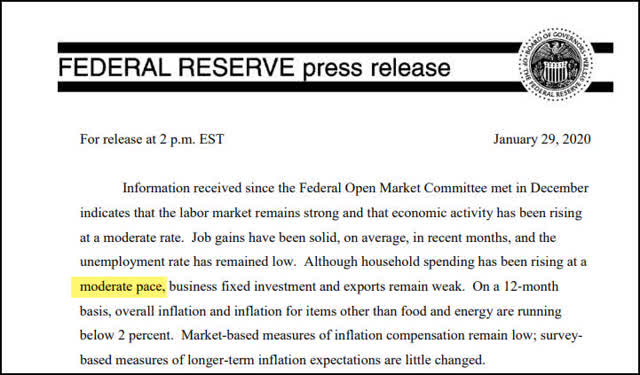 As anticipated, the Federal Reserve will continue conducting repo operations through tax season in April. 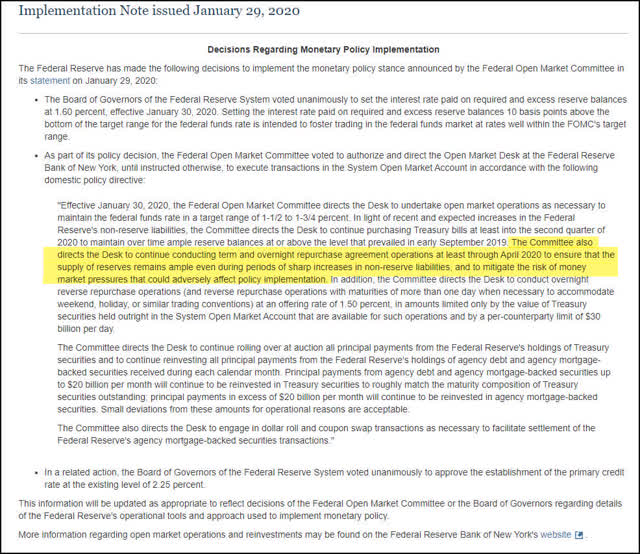 After several cuts to the Federal Funds rate and a sizeable increase to the balance sheet, the yield curve is back to an inverted state with two-year, five-year, and seven-year Treasury rates trading below the effective Fed Funds rate “EFFR.”

Interest rates broadly declined after the announcement and press conference as the spread between the 10-year Treasury yield and three-month yield converged to just 2bps.

The recent decline in interest rates and flattening of the Treasury curve has punished regional banking stocks (KRE), a sector recently outlined a short thesis.

The expectations for monetary policy continue to favor lower interest rates. After the most recent press conference, the bond market shifted expectations for up to 37bps of rate cuts this year.

Based on Fed Funds futures, the market is implying that two years into the future, the Fed Funds rate is likely to be 1.15%, down from today’s effective rate of 1.55%. 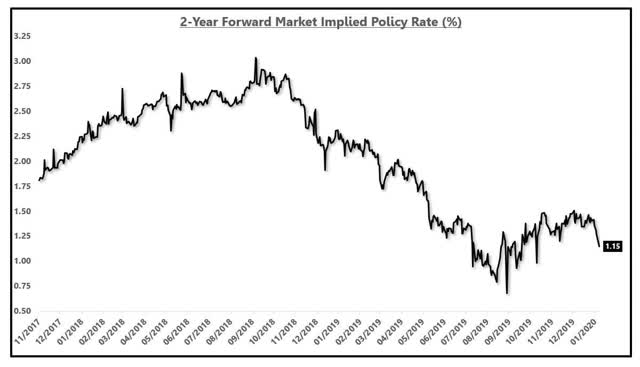 As noted in the 2020 outlook article, the Federal Reserve is likely to lower interest rates, continue expanding the balance sheet, or both this year.

The recent policy changes from the Federal Reserve did not alter the long-run structural outlook continuing to weigh on the economy, nor the cyclical direction of economic growth.

Leading indicators of cyclical inflation pressure, including the growth rate in the CRB index of industrial materials, core import prices, and prices paid reports from various manufacturing surveys continue to rise and support a modest increase in producer price inflation.

That said, short leading indicators of US economic growth show little sign that the economy is set to accelerate.

Slowing rates of economic growth will likely push interest rates lower. A modest cyclical upturn in producer price inflation favor the decline in rates coming from the real rate. Lower real rates favor allocations to TIPS (TIP) or gold (GLD). Treasury bonds across the curve remain attractive with an inflation hedge in the portfolio to respect the signs of an upturn in cyclical price pressure.

At EPB Macro Research, we use the long-standing, predictable sequence of economic cycles to build a robust process of leading indicators and forecast the future direction of growth and inflation.

Through the lens of secular economic trends, recession risk, valuations, and more, we “tilt” a risk-balanced portfolio in favor of assets with the best risk-reward profile.

“He has given me a valuable education and stabilized my investing life – for that I am grateful.”

“I feel that this type of service is beneficial not only to beginners but also professionals.”

Disclosure: I am/we are long TREASURY BONDS, GLD. I wrote this article myself, and it expresses my own opinions. I am not receiving compensation for it (other than from Seeking Alpha). I have no business relationship with any company whose stock is mentioned in this article.