NASA has said a final goodbye to its Spitzer Space Telescope, which has been decommissioned after more than 16 years of service.

NASA mission control downloaded the last Spitzer data and sent through a command to enter safe mode on Thursday, ceasing all scientific operations.

The telescope, which focused on capturing infrared images, launched in 2003 and was operational for 16-and-a-half years, despite only being planned to serve for five.

The spacecraft’s most memorable achievements include the discovery of Saturn’s largest ring and four TRAPPIST-1 exoplanets, as well as mapping the extensive portraits of the Milky Way.

Scroll down for video 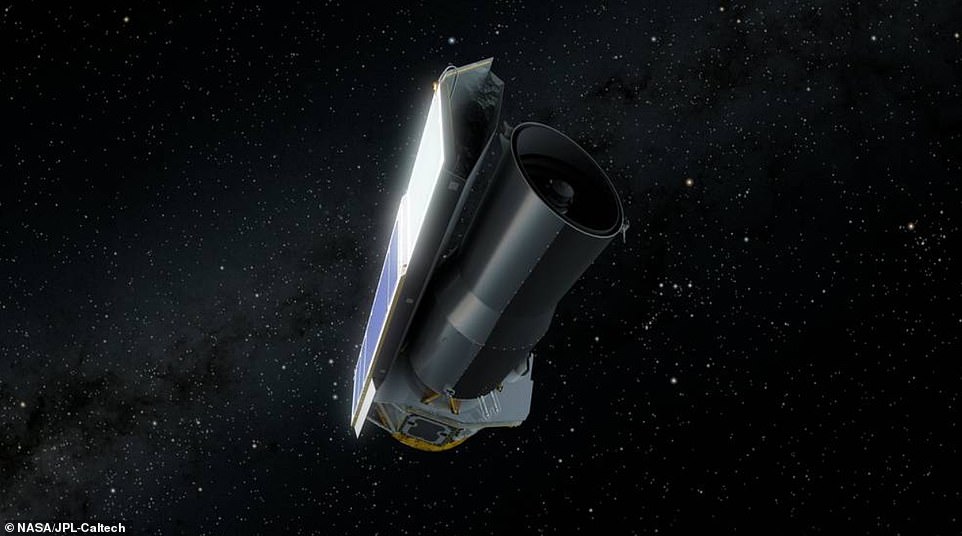 ‘Spitzer has taught us about entirely new aspects of the cosmos and taken us many steps further in understanding how the universe works, addressing questions about our origins, and whether or not are we alone,’ said Thomas Zurbuchen, associate administrator of NASA’s Science Mission Directorate in Washington.

‘This Great Observatory has also identified some important and new questions and tantalising objects for further study, mapping a path for future investigations to follow.

‘Its immense impact on science certainly will last well beyond the end of its mission.’

Among its contributions over 16 years, Spitzer studied comets and asteroids in our Solar System and found a previously unidentified ring around Saturn in 2009 – the planet’s largest. 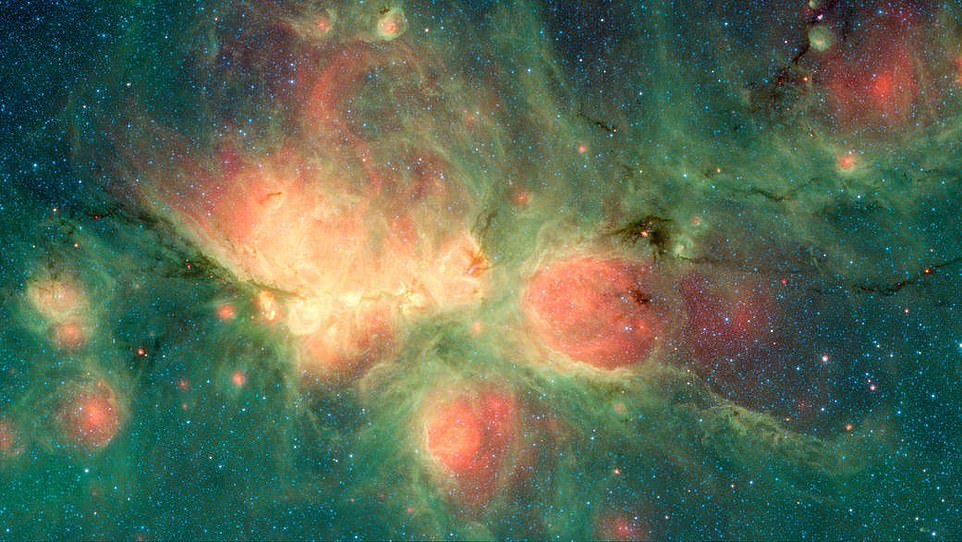 This image from Spitzer shows the Cat’s Paw nebula, so named for the large, round features that create the impression of a feline footprint. The nebula is a star-forming region in the Milky Way galaxy, located in the constellation Scorpius. This image was compiled using data from the Infrared Array Camera (IRAC) and the Multiband Imaging Photometer (MIPS) aboard Spitzer

This star-studded panorama of our Milky Way galaxy is constructed from more than two million infrared snapshots taken over 10 years by NASA’s Spitzer Space Telescope, processed in 2014 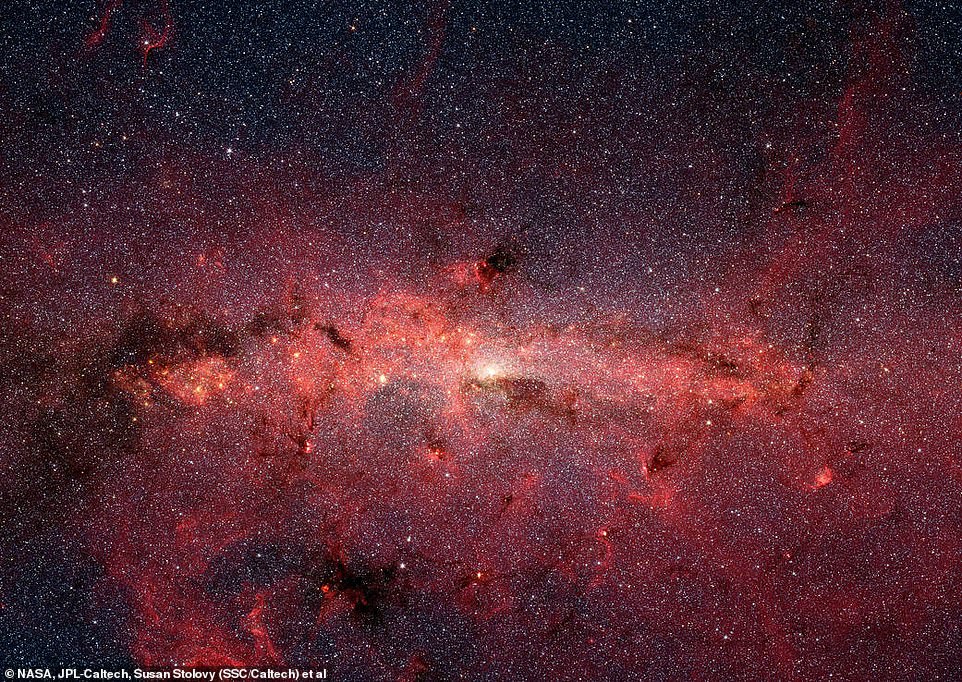 Spitzer reveals the stars of the crowded galactic centre region of our Milky Way. Spitzer’s infrared cameras were able to penetrate much of the surrounding cloud and dust

In 2007, Spitzer also captured enough light from planets outside our atmosphere – known as exoplanets – to identify molecules in their atmosphere.

Spitzer obtained data for two different gas exoplanets, called HD 209458b and HD 189733b – around 159 and 64.5 light years away from our Solar System, respectively.

The exoplanets, dubbed ‘hot Jupiters’ are made of gas, but orbit much closer to their suns than the Jupiter in our own Solar System.

Last year, Spitzer data provided NASA scientists with information of the conditions on a rocky exoplanet called LHS 3844b, 1.3 times the mass of Earth and 48.6 light-years from our home planet. 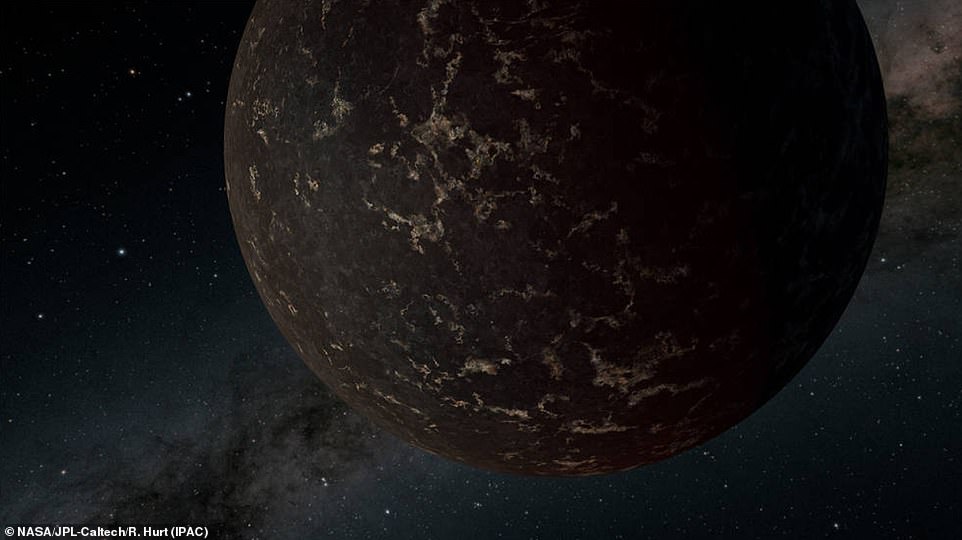 This artist’s illustration depicts the exoplanet LHS 3844b, which is 1.3 times the mass of Earth and orbits an M dwarf star – stars that are smaller, dimmer and cooler than stars like our Sun 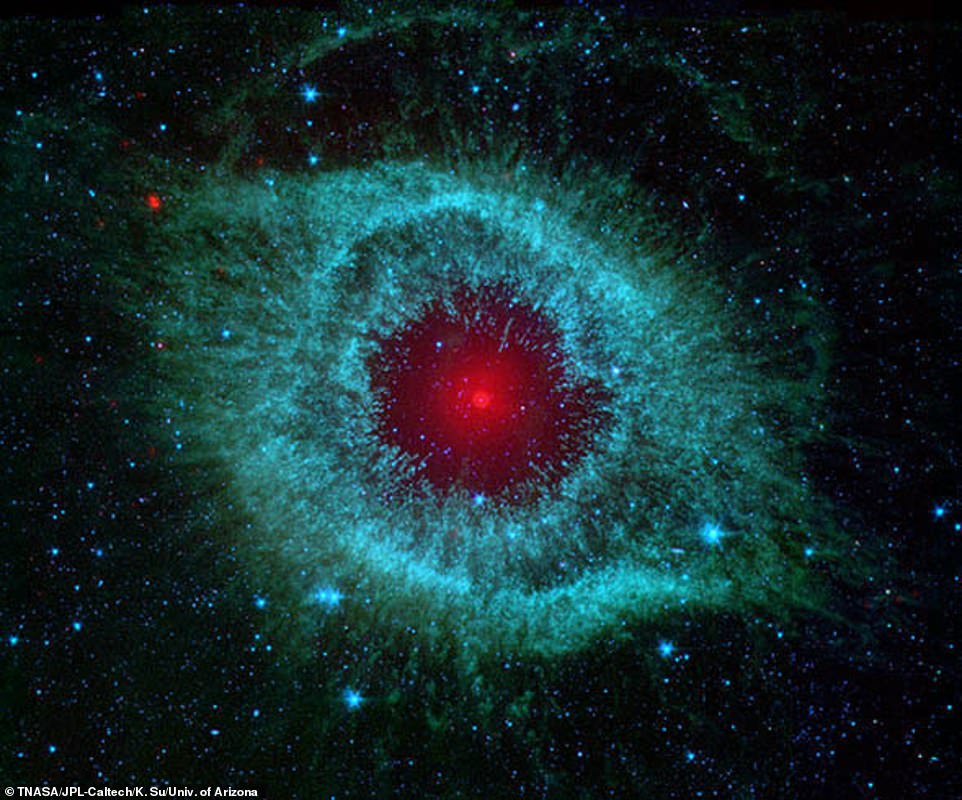 This infrared image from Spitzer shows the Helix nebula, a cosmic starlet often photographed by amateur astronomers for its vivid colours and eerie resemblance to a giant eye

3 scientific instruments on board

Furthest objects seen as they appeared 13.4 billion years ago

It also provided an extensive 360-degree mosaic of our Milky Way galaxy, compiling more than 2 million images collected over the course of 10 years.

But Spitzer’s best-known work, NASA said, may be detecting and determining the mass and densities of the seven Earth-size planets orbiting the TRAPPIST-1 star, back in 2017.

Spitzer discovered the four of the exoplanets orbiting TRAPPIST-1 after the first three were discovered in 2015 using a pair of Belgian optic robotic telescopes.

Spitzer’s discovery made the planets orbiting TRAPPIST-1 the largest number of rocky planets ever found orbiting a single star. 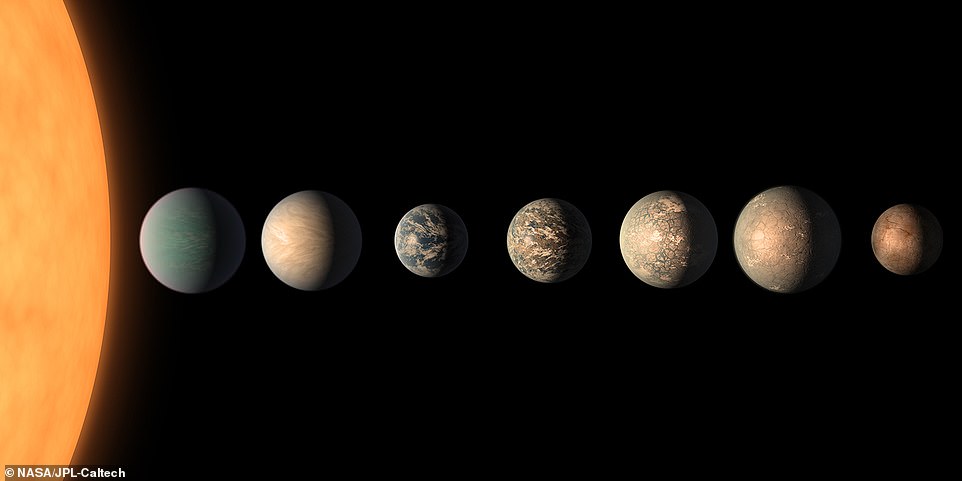 An artist’s impression of the various exoplanets in the TRAPPIST-1 star system. Earth may not be the best planet for life —  some exoplanets orbiting distant stars, including the seven rocky TRAPPIST-1 planets discovered by Spitzer, have the potential to host a more diverse and abundant array of life 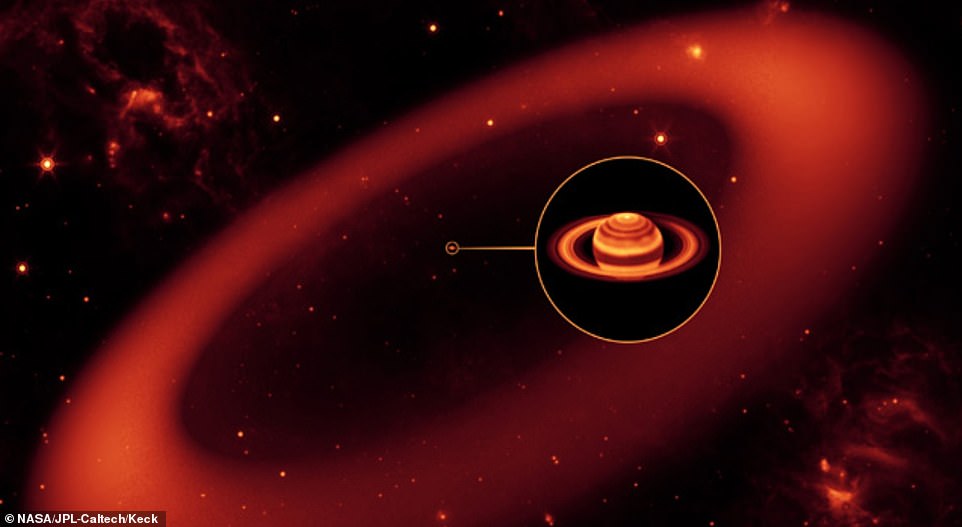 This artist’s conception shows a nearly invisible ring around Saturn – the largest of the giant planet’s many rings, discovered by Spitzer

In 2016, NASA had decided to shut down Spitzer in 2018 in anticipation of the launch of the multi-billion dollar James Webb Space Telescope entering service.

However, when the launch of James Webb was postponed yet again, Spitzer was granted an extension to its operations until 2020.

‘Everyone who has worked on this mission should be extremely proud today,’ Hunt said.

‘There are literally hundreds of people who contributed directly to Spitzer’s success, and thousands who used its scientific capabilities to explore the universe.

‘We leave behind a powerful scientific and technological legacy.’

Spitzer’s prime mission came to an end in 2009, when the telescope exhausted its supply of the liquid helium coolant necessary for operating two of its three instruments.

However, scientists were able to keep the mission going using third instrument, the Infrared Array Camera (IRAC), until 2020.

One of Spitzer’s final acts was to snap a stunning view of the Tarantula Nebula – the first target it was given to observe after its initial launch near the start of the century.

The high-resolution image of the star-forming region – named for its spidery filaments of gas – is made up of data from several observations by the telescope. 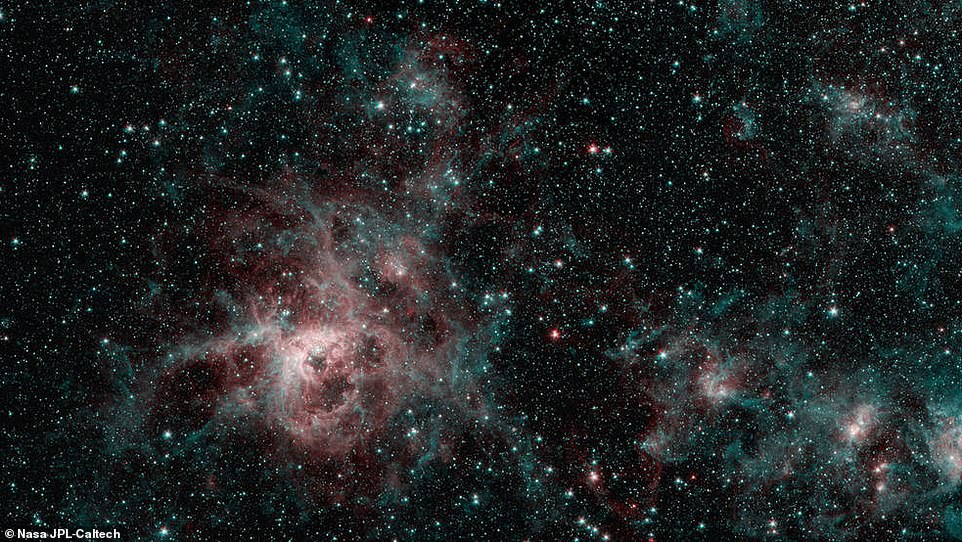 The Tarantula Nebula shows of the full breadth of Spitzer’s capabilities, according to project scientist Michael Werner from the NASA Jet Propulsion Lab in California 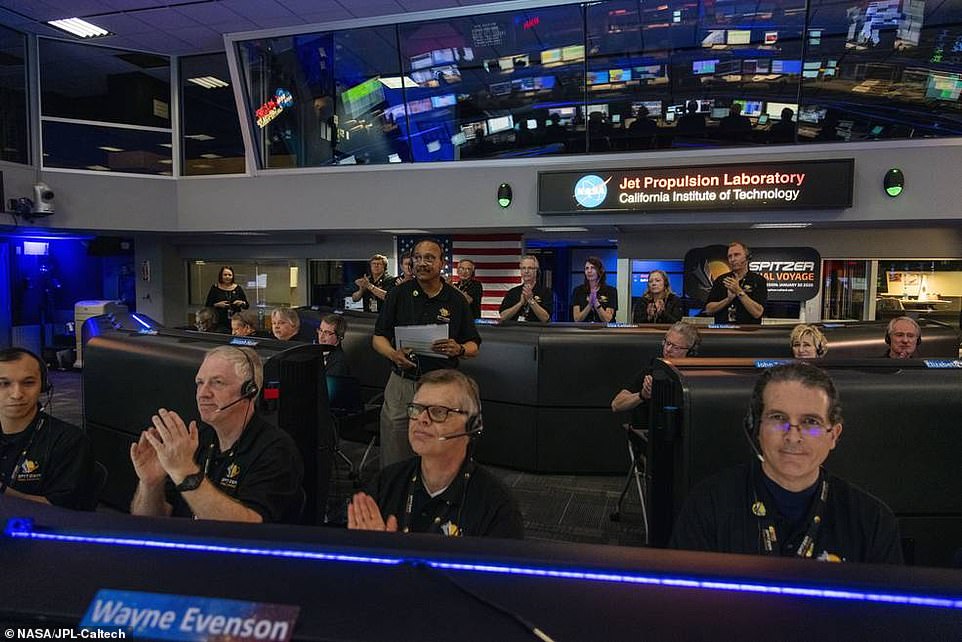 Scientists say they expect researchers to continue making discoveries with Spitzer long after the spacecraft’s decommissioning.

Spitzer was one of NASA’s four Great Observatories – large, powerful space-based astronomical telescopes that were launched between 1990 and 2003.

The fab four – Spitzer, the Compton Gamma Ray Observatory, the Chandra x-ray Observatory and the Hubble Space Telescope – were each built to specifically observe regions of the light spectrum.

Satellite light readings can allow scientists to discern the mass and size of stars in other galaxies and their planets that pass in front of them.

The Great Observatories program demonstrated the power of using different wavelengths of light to create a fuller picture of the universe, NASA said.

Of the four, only the Hubble and the Chandra now remain active, as the Compton was decommissioned in 2000.

All of Spitzer’s data is free and available to the public in the Spitzer data archive.

WHAT IS THE SPRITZER SPACE TELESCOPE?

It consists of a space-borne, cryogenically cooled telescope with lightweight optics that deliver light to advanced, large-format infrared detector arrays

It is capable of studying objects ranging from our Solar System to the distant reaches of the universe.

Peering back into the early universe, it looks at young galaxies and forming stars. 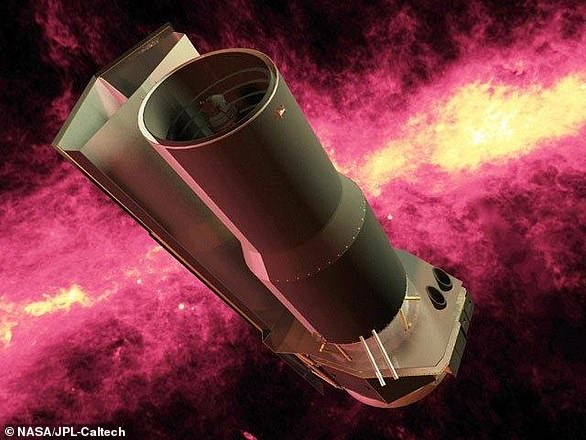 The Spitzer Space Telescope – formerly known as the Space Infrared Telescope Facility – is an infrared cousin of the Hubble Space Telescope (artist’s impression). The band of light in this image is the glowing dust from the Milky Way seen at 100 microns

It is also used to detect dust disks around stars, considered an important signpost of planetary formation.

The mission is the fourth and final observatory under NASA’s Great Observatories program.

It was launched into orbit around the sun, trailing behind Earth, drifting in a benign thermal environment.

By using this orbit, the spacecraft is able to adopt an innovative “warm-launch” architecture, in which only the instrument payload is cooled at launch.