Latest News
Home /John Roberts stares down another possible legacy moment – CNN
Roberts has led the US Supreme Court for 15 years. Now age 65, he may serve another 15 years as chief justice. But Friday, he could face a moment on the elevated Senate dais that significantly shapes his legacy —
if it gets to that point.

The chief justice could be pressed to break a tie vote on whether witnesses will be called. And he will almost certainly face further pleas by Democratic House managers to intervene and require a deeper review of the Trump allegations.

Some Democrats have been trying to heighten the pressure on the chief justice to assume a more expansive role in the Senate. Thursday afternoon, Massachusetts Sen Elizabeth Warren, a Democratic presidential contender, fed a question to Roberts to read aloud, per the customary format, for the US House legal team:

“At a time when large majorities of Americans have lost faith in government, does the fact that the Chief Justice is presiding over an impeachment trial in which Republican senators have thus far refused to allow witnesses or evidence, contribute to the loss of legitimacy of the chief justice, the Supreme Court, and the Constitution?”

As Roberts had done for countless other argumentative or awkward queries, he read Warren’s card with a straight face and firm voice. Lead House Manager Rep. Adam Schiff suggested that the rule of law, not the chief justice’s legitimacy, was at stake.

Nonetheless Warren’s question reinforced the important moment for Roberts and his image in the public eye.

At the high court, Roberts works away from the clicking cameras. More Americans have no doubt seen more of him this month than they have seen of him at least since 2005, when he appeared before the Senate for his confirmation hearings.

During the last nine trial days, Roberts has firmly enforced Senate impeachment rules. He appeared to know all senators by name and state as they asked to be recognized for their respective questions.

Early on, he warned the dueling legal teams to watch the inflammatory rhetoric, referring to a 1905 case that condemned the use of the word ”
pettifogging.” On Thursday, Roberts was irked by a senator’s question that dictated who on the House and Trump legal teams must answer.

“I haven’t specified this before,” Roberts said, “but I think it would be best if senators directed their questions to one of the parties or both and leave it up to them to figure out who they want to go up to bat rather than particular counsels.”

Perhaps his most meaningful statement came at the start of Thursday’s session, when Kentucky Republican Sen. Rand Paul persisted in trying to have Roberts read a question that would have divulged the name of the whistleblower who brought attention to Trump’s conversation with Ukraine’s president over security aid and a possible Ukrainian investigation into former Vice President Joe Biden. 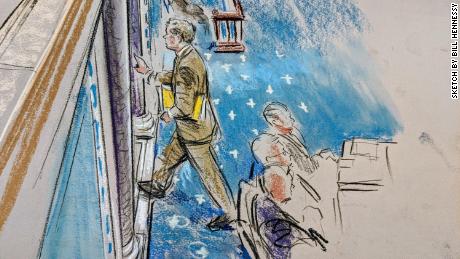 Roberts took a few seconds, studying the question card. “The presiding officer,” Roberts then said, clearing his throat slightly, “declines to read the question as submitted.”

The chief moved on to the next senator, and Paul left the Senate chamber to speak to reporters.

Roberts was likely prompted by multiple concerns in his effort to maintain the integrity of the Senate trial. At the Supreme Court, Roberts takes steps to maintain decorum, avert false assertions and prevent all manner of disruption. In the Senate, he would not have wanted to accelerate tension over the whistleblower’s identity and certainly would not have wanted to be the one who uttered the individual’s name for the first time in such a public setting.

Will he break a tie?

Now, he could be forced into a more difficult dilemma.

As a vote over witnesses nears and the Senate may be evenly divided on the question, Democrats especially have argued that Roberts should be able to break a tie vote.

When the vice president presides over the Senate, he can cast a vote when the Senate is tied, but that power is specified in the Constitution. For the trial of a President, the Constitution states that chief justice shall preside but does not detail his power.

Senate rules did not give the chief the power to cast votes, but they do dictate that he could make determinations on the relevance and materiality of evidence. The rules say that the chief could be reversed by a majority of the Senate. 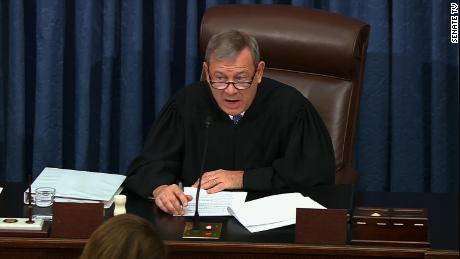 Many scholars of impeachment believe Roberts would not be able to break a tie, and a recent Congressional Research Service report observed, “The Chief Justice, when presiding over an impeachment trial, would not be expected to vote, even in the case of a tie. If a vote on a question results in a tie, the question is decided in the negative.”

Still, the voting power of the chief justice as he presides at an impeachment trial has not been tested in modern times. If presented with a 50-50 split, Roberts could assume voting authority.

Yet, based on Roberts’ trademark caution and use of Rehnquist as a model, he may shun any opportunity to make a real difference in this trial. Roberts would also be mindful that however he responds, his actions would color public regard not only for his stature but that of the federal judiciary.

In public speeches, Roberts routinely declares that judges are not like politicians and that their rulings arise from facts and the law.

“When you live in a politically polarized environment,” Roberts said in a New York appearance last year, “people tend to see everything in those terms.” He added of his colleagues on the bench, “We will continue to decide cases according to the Constitution and laws without fear or favor.”

Roberts has worn the heavy mantle of public expectations in his role at the middle of an ideologically divided bench. Through the years, he has disappointed conservatives who wanted the Republican George W. Bush appointee to vote consistently for their side. Roberts has equally frustrated liberals seeking regular replays of his 2012 decisive vote, with the four liberal justices, to
uphold the Barack Obama-sponsored Affordable Care Act. 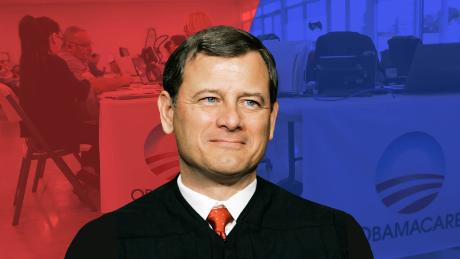 At the Senate, Wednesday and Thursday, the question of Roberts’ power was continually the focus of questions the chief justice had to read aloud from cards.

Roberts offered not a trace of his own views or any hint about whether the hopes some senators have for him are well placed.