The turnaround at Wells Fargo (WFC) is taking a lot longer to materialize than I anticipated and we’re essentially back to the share price level we were at when I first recommended the shares last July (here).

Everything we heard on the 4Q earnings call points to 2020 being a “transition” year where we’re not going to get a lot of clarity on future strategy or a time-frame for getting to better efficiency and ROTE levels. Management’s focus remains squarely on resolving the regulatory issues first, before tackling performance.

So the question turns to whether it’s just better to draw a line under WFC for the time being, sell the shares and recycle the cash into something else like Citigroup (C) on the same multiple and much less uncertainty.

It’s a tempting option but I’m going to sit tight and I’ll outline why in this article. I still think the ultimate upside is big. Until it arrives, the stock yields 14% with repurchases included so the wait isn’t completely unrewarded. Plus, I struggle to see the shares going much lower given how friend-less WFC is currently. This means that if, or rather when, we get a market correction, WFC should act as a decent hedge against other bank holdings.

Eyes on the prize

4Q was awful by any measure. EPS missed consensus by 17%, the shares fell 6% and the outlook commentary offered no quick fixes. 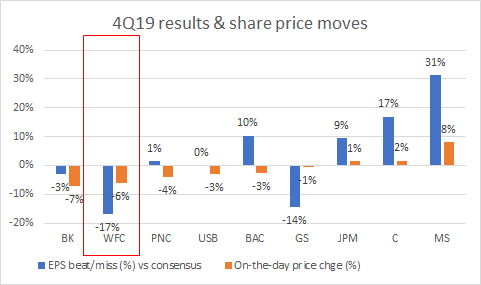 Source: author’s calculations based on IG Index and company data

Operating leverage was -15%, driven by a 9% YoY increase in underlying expenses and 5% lower revenues. The only small consolation was this at least wasn’t the worst of the peer group, Goldman Sachs posted -19%. 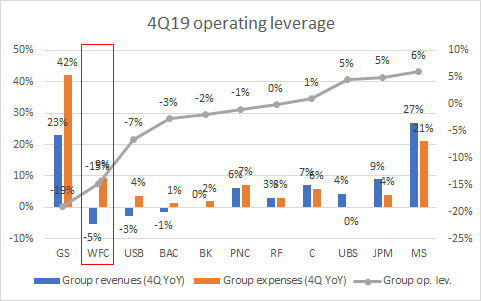 The picture in the key Community Banking segment wasn’t any better with interest income declining 11% and revenues by 8% YoY, which was easily the weakest performance of peers. 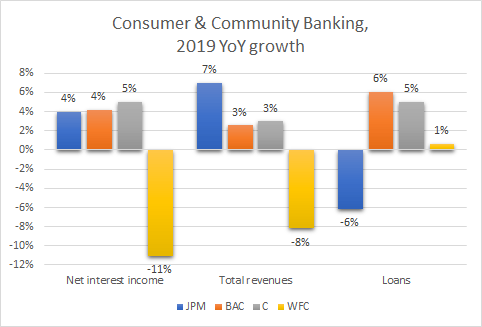 And yet it wasn’t all doom and gloom. One of the frustrations of analyzing WFC is that management does a poor job of explaining what are exceptional items impacting the numbers and what is the underlying performance. This is particularly true of expenses, which are being significantly impacted by temporary costs related to the 12 public enforcement actions as well as the Fed consent order, all of which require significant resource commitment. These are not itemized in the results so it’s impossible to see the underlying picture.

Similarly on revenues, there’s clearly a big impact presently from upheaval caused by the all of the recent management changes. The performance is so poor, particularly in Community Banking, that it can only be explained by many parts of the business having simply stopped proactively selling to customers until they’ve been told what the new strategy and priorities are. Again, management has made no real effort to quantify this impact.

Consequently, although I don’t normally pay much attention to non-P&L metrics, I do think in the case of WFC it’s probably important to try to look “under the bonnet”.

The picture here is more comforting. Many of the non-P&L metrics show growth and improvement. It is certainly not a picture of a broken business. 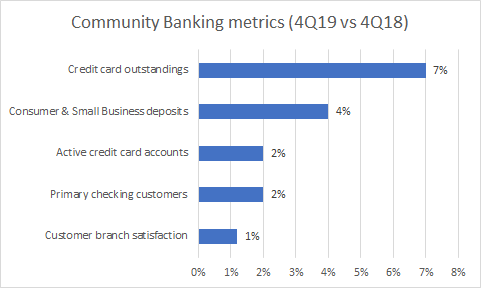 If WFC were suffering customer flight I’d be worried. But that’s not what’s happening. Rather, it looks like were in a hiatus period where there’s no real sales activity going on until new management sets a new direction.

In-coming CEO Charlie Scharf doesn’t appear to think the company needs fundamental restructuring either, certainly not in terms of its current mix of activities. In response to a question on the 4Q call on whether all the businesses the company has today deserve to be inside the company he said:

As far as the big pieces of the company, absolutely. When we look at the benefits that our clients get from having the combination of consumer businesses, wealth businesses and wholesale businesses under one roof are significant today. And as we look to the future, we believe they should be even more significant.

There’s no doubt there’s a need to improve cost efficiency. And that remains the real prize in the WFC story. As Charlie Scharf said on the 4Q call:

There are still big parts of the company where we are extraordinarily inefficient.

This is obvious from even a cursory glance at WFC’s cost ratios, which were up to 10ppts higher than peers in 2019 on a reported basis and still 5-10ppts higher on an underlying basis excluding litigation and regulatory charges. 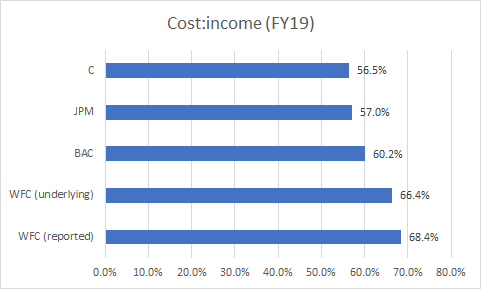 Primarily I’d say WFC has a headcount problem, which might be the easiest type of cost problem to resolve. Revenue generation relative to metrics like number of branches or size of loan and deposit franchise look comparable to peers. But revenue generated per employee is 25% lower than JPM or Bank of America. 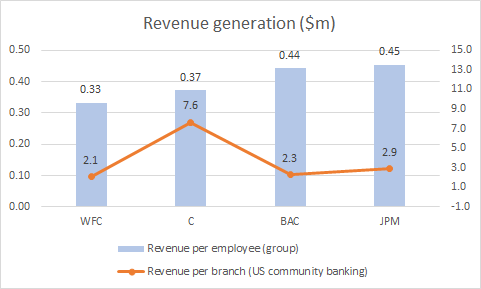 This is reason no.1 why I want to stay invested in WFC. The cost problem will ultimately be resolved. It may take time but it’s not a difficult fix. It’s not a complete reinvention of the business model, it’s simple efficiency improvement and headcount reduction.

As and when it is resolved, I see big upside to Street estimates – and the share price.

I’ve outlined some broad parameters in the next table, which takes 2021 Street consensus as the starting point. Even by that point, two years from now, the market doesn’t seem to have high hopes for WFC and expected cost:income is still at a relatively high 64%, not much changed on the 66% underlying rate reported for 2019.

If management could improve that number to 60%, which would still be high by peer comparison and for WFC’s mix of businesses, then Street estimates would be ~15% too low.

If management can get cost:income down to 58%, which must surely be the ultimate goal, if not lower, then the upside is 20% or above.

Share repurchase authorization is large and unaffected by recent events

In the meantime we’re being well paid to wait and that’s reason no.2 for not selling out of WFC.

I’ve remarked in previous articles that WFC has peer-leading share repurchase potential stemming from having a very under-leveraged balance sheet.

The leverage ratio was 240bps above the regulatory requirement in 4Q common equity tier 1 was 260bps above requirement. These are the biggest surpluses of the peer group.

The result of this is that WFC is getting big CCAR capital return authorizations.

In last year’s CCAR, the company was authorized for $32.4bn of total payouts to end-June 2020 (dividends and repurchases). Although not the biggest absolute number, it is the biggest authorization when measured against market capitalization, equating to a total payout of 15%.

The share repurchase authorization alone is 11%, again the highest of the peer group.

There’s no reason WFC shouldn’t get sign off on a similar level of capital return for 2020/2021 when this year’s CCAR results are announced in June.

A 14% annual dividend/repurchase yield is certainly high enough to justify being patient when it comes to thinking about the eventual earnings turnaround. 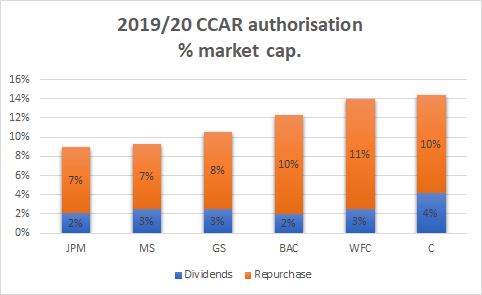 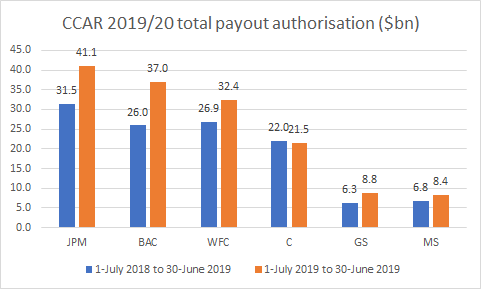 Reason no.3 I’m not selling out now is that the Street view on WFC is extremely bearish with sell recommendations being at record highs and the number of buy recommendations now being less than 10%.

Selling at the bottom of market sentiment is never a good idea and as and when sentiment turns more positive, the shares could move higher quickly.

There’s no getting around that 4Q was woeful but with a new CEO coming in, some “kitchen-sinking” was always on the cards. Looking at the non-P&L “under the bonnet” metrics, the underlying business doesn’t look in bad shape.

The turnaround will take longer to materialize than I’d hoped and it probably won’t come in 2020, although we’ll hopefully have a better understanding of management’s road-map by year-end. But there’s a huge cost story buried in WFC that will get unlocked eventually.

In the meantime, dividends and repurchases equate to a 14% yield so we’re being paid to be patient.

I’m going to stick with the shares with a 1-year target price of $60. This merely assumes the company can deliver existing 2021 Street estimates, which don’t include much in the way of cost save. I’d see full execution of the cost opportunity adding at least another $5.

WFC has become a longer-term story but bailing out at this stage doesn’t look the right move. 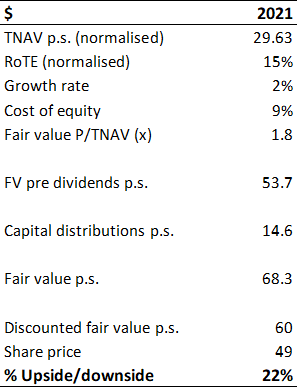 Disclosure: I am/we are long JPM, BAC, WFC. I wrote this article myself, and it expresses my own opinions. I am not receiving compensation for it (other than from Seeking Alpha). I have no business relationship with any company whose stock is mentioned in this article.