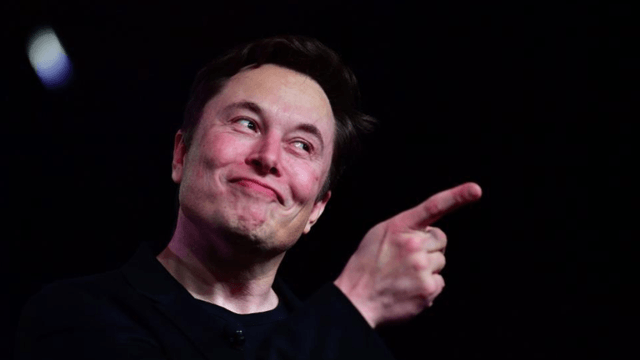 Tesla (TSLA) shares have more than tripled since their lows of last June….

….climbing above Volkswagen’s (OTCPK:VLKAF) $100 billion market cap for the first time. If Tesla shares can hold this level for another month, and then keep an average market cap around this level for another six months, CEO Elon Musk stands to earn about $346 million in Tesla stock options. Consumer activist Ralph Nader, who rose to fame 55 years ago warning about safety issues of U.S. auto manufacturers, struck a cautious tone on Twitter, warning of the “speculative zeal” behind Tesla shares’ parabolic run:

Bloomberg’s Joe Wiesenthal was more sanguine about Tesla’s run-up, suggesting that it’s not weird for Tesla, because Tesla shares are essentially more like call options than shares of most other companies in that they have had more extreme possible upside as well as downside. In Wiesenthal’s view, Tesla’s surprise profit in October took the fears of the extreme downside possibility (bankruptcy) off the table, enabling the stock to soar since:

My System’s Current Take On Tesla

My system uses a combination of past total returns and forward-looking options market sentiment to estimate potential returns for securities during the next six months. Essentially, it assumes securities will revert to their long-term mean returns, and then it weighs that assumption against options market sentiment and adjusts it up or down accordingly. Here’s how that works with Tesla in particular.

My system starts with a mean of a stock’s most recent six-month return (the “Short Term Return” in the screen capture above) and its average six-month return over the last 10 years (the “Long Term Return”). Since Tesla hasn’t been public for 10 years, it uses Toyota (TM) as a proxy for the long-term return. The mean of those two returns is about 63.2% (the “Exp Return” column), so the system gauges options market sentiment on Tesla by attempting to hedge it against a >9% decline over the next six months with an optimal collar capped at 63.2%. This is not possible to do, so the system lowers the cap until it finds an optimal collar. It finds one at 29%. For less risky names, there are positive adjustments at this point, but they don’t apply to Tesla, so my system’s potential return estimate for Tesla over the next six months is 29%. Bear in mind that’s a high-end estimate: Actual returns average about 0.28x my system’s potential returns.

For both of these examples, I will assume that you own 200 shares of Tesla and can tolerate a 20% decline over the next several months, but not one larger than that. In the screen captures below, I have circled the annualized cost as a percentage of position value in order to distinguish it from the cost as a percentage of position value over the time frame of the hedge.

As of Wednesday’s close, these were the optimal, or least expensive, put options to hedge 200 shares of Tesla against a >20% decline by mid-June. 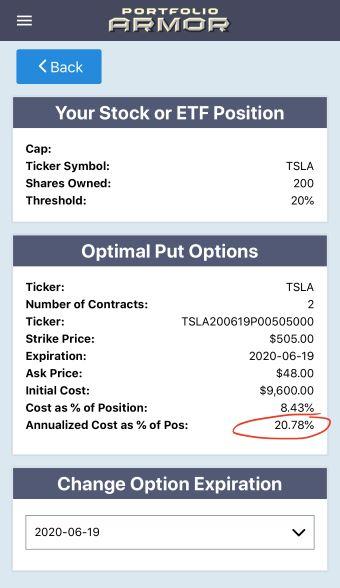 The cost of this protection was $9,600, or 8.43% of position value, calculated conservatively, using the ask price of the puts (in practice, you can often buy and sell options at some price between the bid and ask). That worked out to an annualized cost of 20.78% of position value.

If you were willing to cap your possible upside in Tesla at 20% more than the next several months, this was the optimal collar to give you the same downside protection as the hedge above over the same time frame. 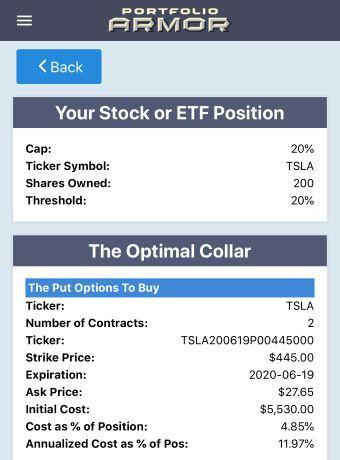 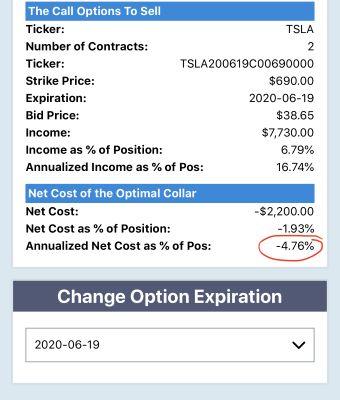 Here the net cost was negative, meaning you would have collected a net credit of $2,200, or 1.93% of position value, when opening this hedge, assuming, conservatively, that you bought the puts and sold the calls at the worst ends of their respective spreads. That worked out to an annualized cost as a percentage of position value of -4.76%.

For readers wondering why I gave Tesla a “neutral” rating here, despite my system estimating a potential return of 29% for it over the next six months, the reason is that my system currently gives a higher potential return to the SPDR S&P 500 ETF (SPY) than it does to Tesla.

The top ten names I have presented in my Marketplace service each week since June of 2017 have outperformed SPY by 1.88% annualized so far, and are all much less expensive to hedge with put options than Tesla. You can sign up for a free two-week trial to the service here.

Disclosure: I/we have no positions in any stocks mentioned, and no plans to initiate any positions within the next 72 hours. I wrote this article myself, and it expresses my own opinions. I am not receiving compensation for it (other than from Seeking Alpha). I have no business relationship with any company whose stock is mentioned in this article.