Latest News
Home /If this Texas student doesnt cut his dreadlocks, he wont get to walk at graduation. Its another example of hair discrimination, some say – CNN
Spread the love

But for the past few days, Arnold — a senior at Barbers Hill High School in Mont Belvieu, Texas, east of Houston — hasn’t been in school. He might not get to attend his senior prom. And with graduation coming up in a few months, Arnold might not even get to walk across the stage with his friends.

It has everything to do with his hair.

Though the district allows dreadlocks, male students’ hair cannot extend below the eyebrows or ear lobes, and must be kept shorter than the top of a T-shirt collar.

Arnold’s dreadlocks hit below his shoulders, though he puts them up in an effort to comply with the dress code, his mother Sandy Arnold told CNN. Throughout high school, it hasn’t been a problem.

But just before the start of winter break in December, the district had some news for the Arnold family: Cut the locks or face the consequences.

Arnold, 18, hasn’t been prohibited from attending school, the district said in a statement to CNN.

He has, however, been told he can’t walk at graduation if he continues to not follow the code. He’ll still be allowed to graduate, just barred from spending the moment with his family and friends.

In the meantime, Arnold has been hit with in-school suspension, his mother told CNN. He’s served one day of it so far, because she said he hasn’t been attending school. If her son wants to continue at the school, in-school suspension is his only option, she said.

Cutting his hair, though, is not an option.

Arnold’s father is from Trinidad, and growing dreadlocks is a common part of the culture. But Sandy Arnold said that shouldn’t matter.

“He should get to choose who he identifies himself as, and he shouldn’t be discriminated against,” she said. “You don’t tell girls they can’t have short hair. It’s so much bigger than DeAndre.”

The school district does allow students to fill out exemption forms for medical or religious reasons, allowing students to break the dress code in special circumstances.

Sandy Arnold told CNN she submitted the form Wednesday. When asked why she delayed, she said she wasn’t aware an exemption form was available.

The hair length policy isn’t necessarily unique. Both
Anahuac Independent School District and East Chambers Independent School District — both in Chambers County, along with Barbers Hill — have the same or similar policies regarding hair length for boys. East Chambers’ policy varies slightly, allowing hair to extend
no more than one inch below the collar and earlobes.
But as Arnold’s situation garners increasingly more publicity, people across the country have called the policy racist. The story has even reached the likes of actress Gabrielle Union,
who tweeted her support for the teenager and told him to “keep fighting” against the “policing” of black hair.

“People want to call us racist, but we’re following the rules, the law of the land,” he said, arguing that the policy is fully within the realms of the law. “We’re certainly not making this up.”

Arnold’s mother said she has tried to work with the district. She told CNN she has attempted to meet with Poole, and has shown up to board meetings and emailed members of the district’s board of trustees. Still, she said she has been unable to make it onto the meeting agenda. Instead she’s been relegated to speaking during the open forum, where she’s given only a few minutes to make her case, she said.

The stipulation regarding hair length has been in place for about 30 years, Poole told CNN. It hasn’t been modified in any significant way, though small changes were made clarifying rules around the exemption forms. Arnold, though, was in violation of the dress code even before any modifications were made, he said. 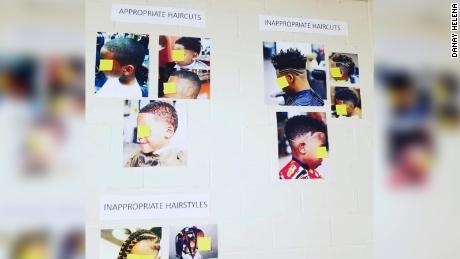 Poole went on to defend the policy, calling it an “expectation of the community.” High expectations lead to success, he said. The dress code — including the hair length rule — is a part of that.

When the school district tweeted that sentiment Wednesday, Bernice King, a daughter of Martin Luther King Jr., hit back.

“Arnold’s locks do not reflect ‘lowness’ or a deviation from what should be a ‘high expectation,'”
she wrote.

Ibram X. Kendi, a professor and author of “How to Be an Antiracist,” also replied, writing that demanding a student to cut his dreadlocks actually holds students to a low standard of expectations.

“There’s nothing lower than teaching students to not respect cultural difference,”
he wrote.

Sandy Arnold has been told the hair length policy is to help deter distractions, she said, but she wonders who exactly his hair is distracting.

“It’s not keeping DeAndre from learning,” she said. “The only time I have to be in the office is concerning his hair. That’s the distraction.”

Currently, according to
information from The Texas Tribune, there are 169 black students in the Barbers Hill Independent School District — which consists of one high school, two middle schools, two elementary schools, one early childhood center and one alternative educational program. Those students make up just 3.1% of the district’s student population.

“How much consideration do you think was made for that 3.1%?” Sandy Arnold wondered. “And I get it, that they don’t understand black natural hair. My point to get on the (meeting) agenda was to try to educate.”

None of the current members of the district’s Board of Trustees are black, though Poole told CNN they have had a black trustee in the past.

When asked whether black people were consulted about the policy, aside from the former board member, Poole reiterated that the dress code is an expectation of the community. Poole, who has been superintendent since 2006, also said this is the first time in his tenure the issue of race has come up with the policy.

Tehia Glass is an associate professor of educational psychology and elementary education at the University of North Carolina Charlotte. Formerly a K-12 teacher, she told CNN she has seen policies like this before, though she doesn’t understand the rationale behind them.

Glass, also the director of diversity and inclusion for UNCC’s Cato College of Education, has studied cultural diversity in elementary education. In Arnold’s case, she said, these rules are essentially telling him he can’t be his full self at school.

“We see this emphasis of black people to conform to whiteness and to assimilate,” Glass explained.

Dreadlocks, a hairstyle associated with black culture, don’t fit into that image.

“They already envisioned what the ideal child should look like in school, and they wrote the rules based on that,” she said. 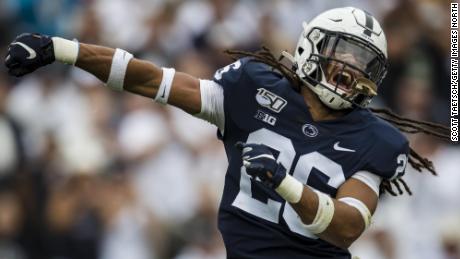 This isn’t a new phenomenon, either. Glass said there is a history of black people facing hair discrimination.

Glass specifically referenced a case from 1976:
Jenkins v. Blue Cross Mutual Hospital Insurance. Beverly Jenkins, then an employee for Blue Cross, worked for the company for three years when she started wearing her hair naturally, in an Afro.

When she came up for promotion, Jenkins was denied and told she “could never represent Blue Cross” with an Afro.

Jenkins sued for discrimination, using the Civil Rights Act of 1964 as her defense. She won.

Other states have passed laws against hair discrimination

None of this exists in a bubble, and Arnold isn’t the first to be put in this kind of dilemma.

In 2018, footage went viral of a high school wrestler in New Jersey who was forced to cut his dreadlocks or forfeit his wrestling match. According to rules set forth by the National Federation of State High School Associations, a wrestler’s hair cannot fall below the top of a shirt collar in the back, below his earlobes on the sides, or below his eyebrows — a policy similar to that of Barber Hills ISD. 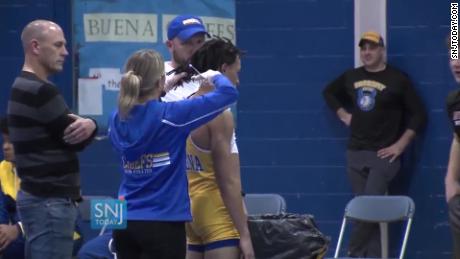 The student in New Jersey elected to have his hair cut, and the video was met with outrage. Even Gov. Phil Murphy spoke up about the incident, saying he was “deeply disturbed” that the student was “forced to choose between keeping his dreadlocks and competing in a wrestling tournament.”

“No student should have to needlessly choose between his or her identity & playing sports,” he said in a tweet.

A year after the incident, Murphy signed a law making it
illegal to discriminate based on hairstyles associated with race.
California Gov. Gavin Newsom
signed a similar bill in 2019, too, in light of the event.
New York City also passed protections on the right of black people to maintain natural hairstyles.

Ultimately, Glass said, cultural rules and norms change as time goes on. Just because this policy about hair length exists now, it doesn’t mean it still has to be a rule, she said — or that it’s applicable to everyone.