But for Democrats, there’s no better evidence with which to paint a picture of what they say is a self-dealing, obstructive leader with a kingly view of his own powers than the highlight reel already compiled by the most television-obsessed president in history.

“I have, in Article II, where I have the right to do whatever I want as President,” Trump says in one clip aired on Tuesday by lead impeachment manager Rep. Adam Schiff, D-California.

The Trump tapes not only break up hours of dense legal arguments. They also put the President at the center of the action, portraying him as the ringleader of the scheme to pressure Ukraine for political favors, and not an outsider player.

They also confront the Republican senators, serving as jurors, with the direct evidence of what Democrats say is outlandish, impeachable behavior in a way that may not change their minds but is deeply uncomfortable. 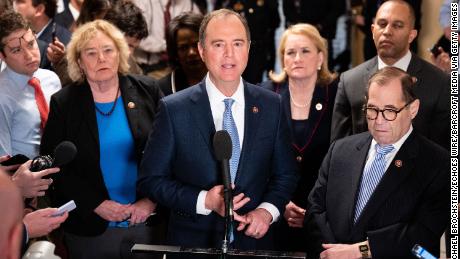 Driving home the case for new witnesses, currently being thwarted by GOP senators in multiple votes, Schiff turned to a clip of Trump on December 3.

“When it’s fair, and it will be fair in the Senate, I would love to have Mike Pompeo, I’d love to have Mick (Mulvaney), I’d love to have Rick Perry and many other people testify,” the President said at the time, taking a position at odds with the current arguments of his legal team and Republican Senate leaders.

On Wednesday, Democrats wanted to establish a pattern of behavior on Trump’s part of soliciting foreign interference in US elections, as he is alleged to have done in a quid pro quo in Ukraine, as they seek to prove corrupt intent.

So Schiff dug out the famous clip from the 2016 election when Trump called on Russia, “if you are listening,” to find Hillary Clinton’s 30,000 “missing” emails. Last year’s call by the President for China to “start an investigation into the Bidens” also came up, as did Trump’s comment to George Stephanopoulos on ABC News that if a foreign power had election dirt: “I think I’d want to hear it.”

As that last clip echoed through the chamber, impeachment manager Rep. Sylvia Garcia, D-Texas, bemoaned the “shocking video” to underline the point.

Every time Trump’s unmistakable tones started reverberating through the chamber, the heads of senators snapped toward the screens showing the clips. The President’s lawyers argue that he did nothing wrong in Ukraine, that he acted within his powers and that the Democratic case that he abused his power is “ridiculous” and unconstitutional.

Trump contradicts his own case 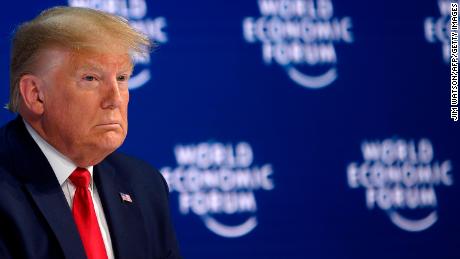 The flurry of video underscored how Trump’s torrent of verbiage often contains comments that hurt his own interests, come back to haunt him or even appear to openly reveal malfeasant behavior. After all, this is the President who fired FBI Director James Comey in 2017 and then went on NBC News and said his shock move had been motivated by the Russia investigation.

The clips of Trump’s remarks also help shed light on how he manages to so often skip free after behaving in a way that might have downed his predecessors: He does it all in public.

Had Trump’s comments on getting election dirt emerged on a secret tape, Richard Nixon-style, they would seem so much more damaging. As House impeachment manager Rep. Hakeem Jeffries, D-New York, said Wednesday when dealing with a rough transcript that shows the President putting pressure on his Ukrainian counterpart: “The evidence of wrongdoing by President Trump is hiding in plain sight.”

In the internal drama playing out in the Senate, Trump’s greatest hits are being used by Democrats to suggest that his alleged abuse of power — seeking political dirt from Ukraine on his potential 2020 opponent Joe Biden — is not an isolated act but conduct in keeping with his character.

The videos also add credibility to a case that Republican senators, almost all of whom are expected to vote to acquit the President, are being faced to hear in relentless, repetitive and incriminating detail. Some of it may even be new to them or may contradict their GOP talking points. And Democratic opponents in November know it will be much harder for them to plead ignorance of what the President was up to.

“I think it’s painful for them to keep hearing how the President shook down the President of another country … but you know what, this is forcing them to face it. If they turn off their ears, I am really sad for our country,” Hawaii’s Democratic Sen. Mazie Hirono said on CNN’s “Erin Burnett OutFront.”

There are few signs, however, that the hours of testimony, also punctuated by clips of other witnesses who took part in House impeachment hearings and are highly critical of the President, are changing the minds of Republicans, who have insurmountable political incentives to acquit Trump.

North Dakota’s Sen. Kevin Cramer appeared to be laughing during two clips played by Garcia, including one featuring Trump.

Sen. Lindsey Graham of South Carolina, a friend and political ally of the President’s, wore a big smile when Schiff played the clip of Trump urging Russia to find the missing emails.

Sen. John Cornyn of Texas was asked by CNN’s Ted Barrett whether he was concerned by anything that the President was depicted as saying.

“The question is whether this is treason, bribery or another high crime and misdemeanor. I mean, this is the nuclear option under our Constitution to remove a duly elected president by the vote of the House and the Senate,” he said. “This is something we should not do unless that constitutional standard is met, and I’m struggling to see how that is even close.”

Conservative commentator Scott Jennings said on CNN that even if some GOP senators were upset by the evidence of Trump’s behavior they were forced to watch — they had little realistic choice about what to do.

Such senators were asking, “Are we really going to throw a resident out of office for the first time in American history over this?” Jennings told Burnett.

Back to pushing for witnesses 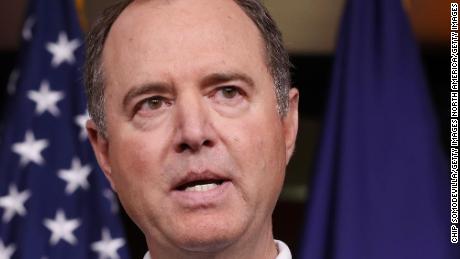 On the first day of the trial, Democrats made repeated attempts to get Republicans on the record as opposing the admission of witnesses such as former national security adviser John Bolton and White House acting chief of staff Mulvaney as they seek to show the GOP is thwarting a fair trial.

If the public comes to believe their narrative, it will be harder for the President to claim vindication following his likely acquittal.

But on the Rumsfeldian principle that you go to the war with the witnesses you have rather than those you wished you had, they featured clips from multiple current and former diplomatic officials testifying in the House impeachment inquiry.

By repeatedly turning to footage of former White House senior Russia adviser Fiona Hill, who described how Trump’s men carried out political errands in Ukraine, Democrats hinted at a broader point about the need for more witnesses in the trial — a showdown that will take place after both sides have presented their cases.

Hill gave the most graphic testimony in the House inquiry about how Bolton had called Rudy Giuliani’s off-the-books diplomatic initiative in Ukraine a “drug deal” and the President’s personal lawyer a “hand grenade.”

That begs the question of Republican senators: Shouldn’t they hear what Bolton has to say for himself?

Democrats also showed footage of ousted US Ambassador to Ukraine Marie Yovanovitch admitting that she was intimidated by Trump’s tweets attacking her.

While the President was all over the trial, his legal team apparently has no desire to see the commander in chief in person at their table in the well of the Senate.

“His counsel might recommend against that. That’s not the way it works,” Trump attorney Jay Sekulow told reporters. “Presidents don’t do that.”