When subsidiaries contribute close to a fourth of the overall valuation, their performance assumes as much importance as that of the parent company. In that sense, the December quarter (Q3) was a mixed ICICI Bank’s subsidiaries — namely ICICI Lombard, ICICI Securities (I-Sec), and ICICI Prudential Life Insurance (I-Pru Life).

Tepid participation from crop insurance products resulted in gross written premium (GWP) staying flat year-on-year (YoY) at Rs 3,770 crore in the third quarter. Even excluding crop insurance, GWP growth at 8 per cent lags industry growth of 13 per cent for the quarter. Much of the underperformance may be attributed to ICICI Lombard’s 50 per cent dependence on motor insurance — own damage (OD) and third-party (TP) policies, with a larger share of 27 per cent taken by motor OD plans. However, offsetting weakness in crop insurance, the general insurer saw better contribution, especially from health and motor TP products. However, it wasn’t enough to arrest the shrinkage of 100 basis points (bps) in the overall market share to 8 per cent in Q3.

The positive factor was the increased share of retail products in motor and health insurance to 72 per cent vis-à-vis 65 per cent seen last year. New tie-ups with Standard Chartered Bank and Karur Vysya Bank seem to be working well. However, the increasing share of retail products is taking the lid off operating expenses ratio, which rose to 24 per cent in Q3, from 20 per cent in the previous year. Analysts at JM Financial believe that focus on profitable segments, such as health, and defocus from the crop insurance business, along with favourable regulation on motor insurance, will remain the earnings driver for ICICI Lombard in the medium term.

I-Pru Life is the meatiest among ICICI Bank’s subsidiaries, accounting for 11 per cent of the bank’s valuation. Some of the changes undertaken in September 2018 are giving positive results, though they remain a work-in-progress. The share of protection policies at 14 per cent and that of unit-linked insurance policies (ULIPs) for the first time falling below the 80-per cent mark to 68.5 per cent in Q3 indicate the company’s intent to remain focused on higher-margin protection products. Overall, I-Pru Life grew its value of new business (VNB) 25 per cent YoY in Q3 to Rs 910 crore. What’s good is that the VNB margin (a profitability indicator) reached 21 per cent in Q3, from 17 per cent in the year-ago quarter, though there is room to catch up with 22-24 per cent margin of peers. 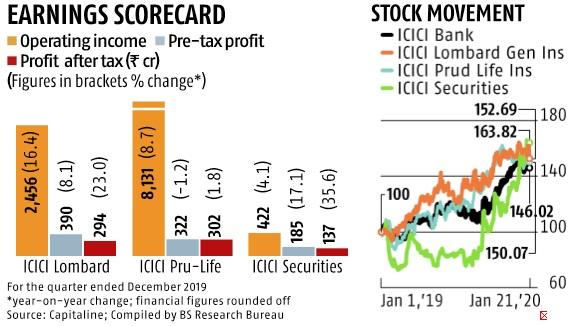 Since I-Pru Life is still in the investment phase, as far as protection business is concerned, it can keep operating costs elevated for a few more quarters and hence the net profit growth may be quite lacklustre. In Q3, net profit grew by a measly 1.7 per cent despite the corporation tax cuts. The silver lining is the fall in net profit, seen for most of FY19, appears to have arrested. As N S Kannan, Chief Executive Officer, I-Pru Life, puts it the focus now is on stabilising the financials. “De-growth seen in savings products has been arrested in Q3,” he says. Given that I-Pru Life stock is the most preferred subsidiary for investors, fast improvement in financials is key to sustain interest in the stock.

With 4 per cent revenue growth in Q3, I-Sec’s results were a surprise as it arrested the trend of revenue decline seen for four quarters in a row. Net profit growth of 36 per cent is also the best since listing.

Many factors, including the October to December period, being favourable for the equity markets helped the broker. Efforts to lean on ICICI Bank’s customer pool, especially its affluent clients, has also helped I-Sec increase its market share (based on active customer base) to 10 per cent in Q3, from 8.1 per cent a year ago. The introduction of products, such as Prime and employee stock ownership plan) financing, is also helping expand the customer base.

“Some of the recent regulatory changes are also favourable, though we still need a conducive (equities) market,” says Vijay Chandok, Manging Director, I-Sec. Even if not many analysts have coverage, CLSA and Antique Stock Broking have retained their “buy” recommendation on I-Sec.