If the
telecom industry runs the risk of becoming a duopoly, the fast growing $4-billion
online food delivery space has already turned into a two-horse race. Cab aggregator Uber India’s sale of its food delivery business on Tuesday has clearly set the stage for a
Zomato versus
Swiggy play.

The signs of consolidation were already there as losses piled up. Last year, Uber India’s rival, Ola, which had earlier acquired Foodpanda, closed down its online food delivery business to move into cloud kitchen services due to aggressive competition.

Seven months later, there’s no room for a third entity in the fight for domination.

In an all stock deal, Uber will get a 9.9 per cent stake in Zomato. According to analysts, the value of the deal is in the region of $350-400 million.

RedSeer data shows that revenues have seen significant growth—up to 150 per cent in 2019—in the food delivery business. But, losses have hit the roof. In many cases, the losses surpass the revenues.

The huge discounts to acquire customers, clubbed with high delivery costs and aggressive promotions, have caused the bloodbath. Even so, the customer numbers are impressive, helping in the subsequent funding rounds.

Indeed, cash strapped companies have always looked for fresh funding to continue to grow. For instance, in the case of Uber Eats, India made up for more than 3 per cent of its global gross revenues in the last three quarters and it already grabbed 12 per cent of the market share. At the same time, around 25 per cent of Uber Eats’ global losses came from India in the corresponding period.

Profitability, a goalpost for investors, has been a mirage in the food delivery business. Even Zomato, backed by Alibaba, has been struggling to make money with its losses rising tenfold in March 2019 to cross the Rs 1,000-crore figure. Its revenues in the same period soared 188 per cent to Rs 1,397 crore.

In an interview to Financial Times, Gaurav Gupta, Zomato’s chief operating officer, had promised the company would be profitable by 2020, and that the group’s cash burn would be 30 per cent of what it was in 2019. 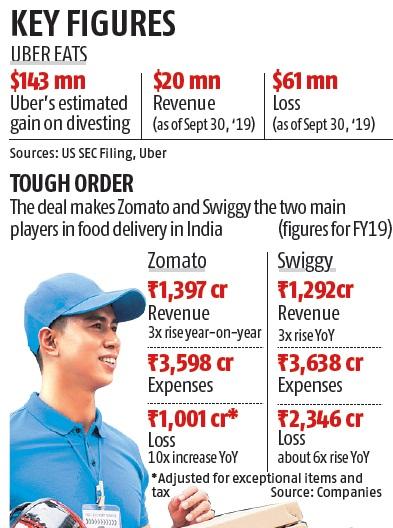 The story is no different for Nasper-backed Swiggy, which saw its losses go up six-fold in FY19 to hit Rs 2,364 crore. But its revenues were on the swing, growing 177 per cent to touch Rs 1,297 crore.

The Uber Eats deal helps Zomato to catapult to the number one slot, leaving market leader Swiggy slightly behind. The company had recently raised about $150 million from Ant Financial and is believed to be looking for a total of $600 million.

The cash burn in the business is directly linked to the high cost of customer acquisition through discounts, especially as companies are increasingly targeting the smaller towns—typically the tier 2 and tier 3 cities. Add to that the inability of the food startups to control the delivery cost—currently at an average of Rs 74.

Even though Zomato expanded food delivery to 500 cities earlier this year, an industry expert pointed out that several of the tier-2 and tier-3 cities are tourist cities. “They have seasonal demand. Often you will find a food business shut down outside of the peak tourist months, which is also not adding to Zomato’s business in a good way. The discounts are certainly going to dry up,” he said.

There is also the question of what this means for restaurants who do business with these food aggregators. “Between the two of them, Zomato and Swiggy were controlling nearly 95 per cent of the market. So, we don’t see much of a change from a restaurant perspective,” said Anurag Katriar, president of the National Restaurant Association of India.

According to Sandipan Mitra, founder of Hunger Box (an institutional B2B platform), by acquiring Uber Eats, Zomato will improve utilization of its delivery boys, who will now also deliver orders of Uber Eats customers. This will help reduce delivery costs, Mitra said.”

(
Inputs from Samreen Ahmad in Bengaluru)